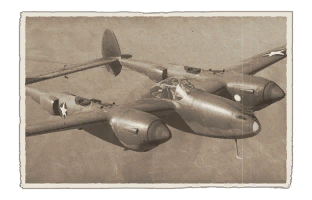 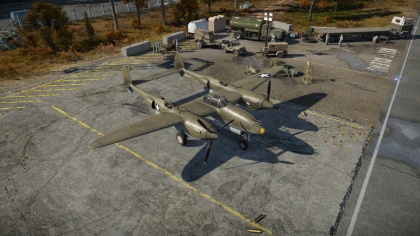 When forced to deal with faster opponents, evade and use teammates. If the direction it is caught going in is opposite to the team's side of the map, a handy trick is rolling over and pulling 180 degrees until the plane comes out the other direction, a maneuver known as a split S. It gains speed (instead of a horizontal turn, which loses it) and exposes the plane to the minimum amount of enemy fire while doing so, which is important, as the P-38 is very broad in the wings and prone to catching fire due to the fuel tanks.

In terms of ammunition, Air Targets is preferential for the cannon and Universal for the MGs, if stealth is not used. There are other options, most notably Ground Targets for the cannon and Tracers or Ground Targets for the .50 cals, but the tracers on the .50 cals are weak, unlike the M20 API-T on the P-51s and P-47s, and groundpounding should be reserved for later parts of the game in case a bomber is climbing to space, as the plane is an interceptor and cannot carry suspended armaments.

Ammo conservation on the cannon is not very important; it has a low fire rate and does not jam easily once the 'New 20mm Cannon' modification is unlocked; moreover, each shell has a high damage output, especially on stealth. The .50 cals can be sprayed indiscriminately.

As a bomber-hunter, the P-38E is superb. Its nose-mounted armaments allow it to sit a kilometer behind enemy bombers such as He 111s, outside of effective range of their guns but still able to hit hard with its 20mm cannon.