Difference between revisions of "P-36C" 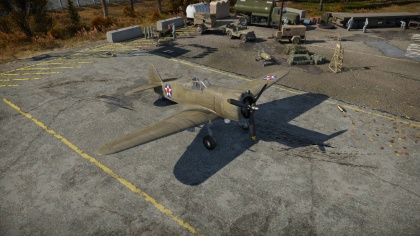 This aircraft is an all-round performer, with later versions taking on Fw 190s and later 109 F variants. It has an excellent turn time at low and high speeds, a good dive speed and good rate of climb. Its higher altitude performance is fairly average, but this doesn't really matter since most lower tier games occur at lower/ ground level. The issue with the C variant is that its armament is sometimes in-effective against higher tier aircraft with armour, as well as the ammo count being quite small, meaning frequent reloads. In Realistic Battles, it is recommended to climb straight- side-climbing can be done, but isn't normally necessary- and gain altitude over your opponent, before diving and pulling numerous energy loops, oval-shaped flight moves over the enemy. Head-ons, especially with little armour and the large radial engine, is not recommended unless the enemy is known to be weaker. A P-36 has the speed to catch and escort bombers if they choose to wait, and can do an excellent job of escorting higher tier bombers. The one weakness of the plane's manoeuvrability is its roll rate, which can be countered by hard yaw movements, although this is only advised in large direction changes. In dog-fights, this reduces speed and accuracy.

The P-36A's "teething problems" were so serious that its introduction was halted in several squadrons and flights with the new fighters were limited. Many of the planes were left grounded and waiting for the modernization they needed.

When Japan attacked Pearl Harbor on 7 December 1941, there were 45 P-36As in Hawaii, 44 of which were part of the three squadrons and command division of the 15th PG. Ten of the Hawks were destroyed or damaged in attacks on airfields. After the first wave from the Japanese, four standby P-36s from the 46th Pursuit Squadron were able to take off and chase the retreating group of 11 B5N2 torpedo bombers and A6M fighters. In the resulting battle, they shot down two Japanese planes, making these the first USAAC conquests in the Pacific War. On the same day, P-36s made another 14 combat flights in search of Japanese aircraft carriers.

The American Hawks ended their combat operations there. P-36 planes were quickly removed from active service and given to training subdivisions, which used them until mid-1943.