Difference between revisions of "P-26B-35" 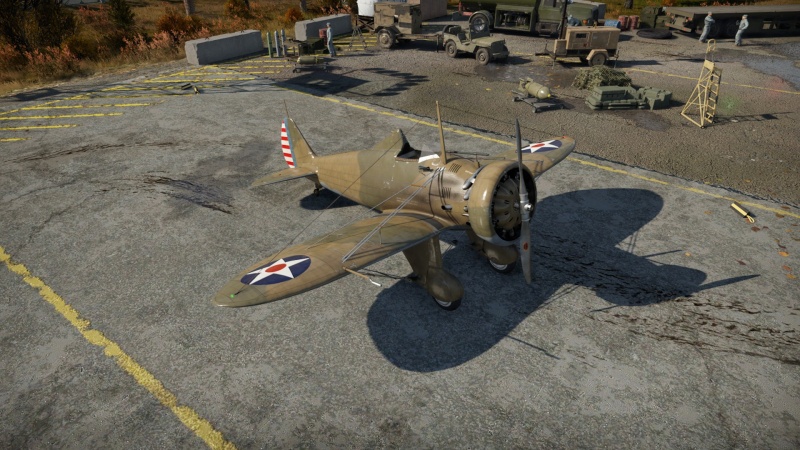 The P-26B-35 Peashooter is a rank I American fighter with a battle rating of 1.0 (AB/RB/SB). It has been in the game since the start of the Open Beta Test prior to Update 1.27. The difference between the P-26A and P-26B variants is negligible (the B variant received a fuel-injector engine).

The P-26B has no armour protection and all important modules are centrally located, meaning that the aircraft is, much like most of its contemporaries, very fragile. However, this is mitigated somewhat by the scarcity of deadly large-calibre guns at the rank.

The P-26B-35 can be outfitted with the following ordnance:

Like most US fighters, the P-26B-35 Peashooter is a decent Energy fighter even though its high lift creates unstable diving characteristics. Despite being a monoplane, the P-26 is not the fastest reserve fighter. In most regards the P-26B will be outmatched by enemy fighters; for example, the Japanese Ki-10s will not only turn circles around the P-26B, but will out-climb it and out-run it too. However, the slow German He 51 makes an easy target for a P-26B.

Unlike the P-26A-34 M2, the P-26B-35 does not have a 12.7 mm M2 Browning heavy machine gun. Both fighters are available at the same time and identical in all other regards.

In addition to the P-26Аs they had already received, the USAAC ordered 25 more fighters. Two of them were designated P-26В (Model 266A). These aircraft were equipped with 600 hp Pratt & Whitney R-1340-33 nine-cylinder, air-cooled, fuel-injected engines.

At first, landing flaps were mounted on the aircraft. Externally, these machines differed from the Р-26А in the absence of a carburettor air scoop and in the modified design of their exhaust pipes and the tail wheel. But in other respects, P-26B fighters were identical to the late variants of the P-26A. Both planes were test-flown in June 1935 and then handed over to the USAAC.

It was planned that all 25 aircraft would be built as P-26Вs, but Pratt & Whitney Company was not able to supply R-1340-33 fuel-injected engines. So, 23 machines of the P-26C variant were produced and equipped with Pratt & Whitney R-1340-27 engines, with minor modifications to the fuel system and the carburettor. The first P-26Сs were delivered to the troops in early 1936.

After a year in service, the P-26С planes were equipped with R-1340-33 fuel-injected engines and brought up to the P-26В's standard. They then obtained the update designation.

The P-26 became the first monoplane – and the first all-metal fighter – accepted for service with the USAAC. At the same time, it was the last American fighter with external wing braces, an open cockpit and a non-retractable landing gear system. The Peashooter became the last fighter built on a full-scale basis by Boeing Company.

The P-26 was not in service with the USAAC for very long. After the new P-35 and P-36 fighters were accepted into service, P-26 aircraft were withdrawn from the front lines. At the beginning of the Pacific War, P-26 fighters remained at US military bases on the Hawaiian Islands and in the area around the Panama Canal. 12 planes were handed over to the Philippine Air Force, which was in the process of forming. It was these aircraft that participated in combat operations in December 1941, and they were completely destroyed by the Japanese. The P-26 was officially withdrawn from service in early 1942.