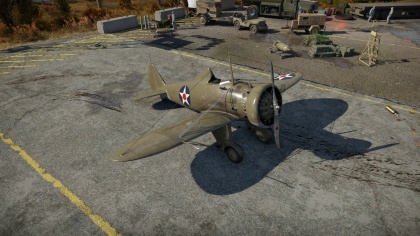 The P-26A-34 M2 Peashooter is a reserve fighter for the American tree of fighters. Americans are known to use the Boom and Zoom Tactics and most people recommend to use that same tactic for this plane.

The P-26A-34 M2 Peashooter's armament differs from the other American reserve planes in that it carries a single 12.7 mm M2 Browning machine gun with 200 rounds in the place of one of the 7.62 mm machine guns. This is the same set up as the P-36A and F2A-1. The 12.7 mm is more powerful, takes longer to overheat, has a longer reload time, and has a slightly lower rate of fire than the 7.62 mm.

The Boeing P-26 Peashooter was a plane both ahead of its time and quickly made obsolete. First flown in 1932, the P-26 is the oldest plane in the game. It was one of the first all metal monoplanes adopted into military service in 1933 (In comparison, the He 51 and Ki-10 entered service in 1935), making it one of the fastest fighters in the world at the time, but it suffered from poor flight performance and dangerous landing characteristics. However, as newer fighters entered service around the world, the P-26s advantages diminished and its disadvantages became vulnerabilities. By the time of World War Two, the P-26 was hopelessly obsolete.

The P-26 saw the most of its combat serving in the Chinese Nationalist Air Force during the Second Sino-Japanese War, against Japanese Ki-10s, and notably A5Ms in some of the first all metal monoplane dogfights. Although it performed admirably in the pursuit role (bomber interception), in air-to-air combat with Japanese fighters, the deficiencies of the model showed.

In US service, the P-26 had a similar record. During the Japanese invasion of the Philippines, the P-26s scored only a handful of air-to-air kills against Japanese attackers. On December 24, 1941, their crews burnt the remaining planes to prevent their capture. Of the one hundred and fifty one built, only nine P-26s air worthy remained on Christmas 1941, a single squadron defending the Panama Canal Zone, which were removed from service shortly after.