Difference between revisions of "P-26A-33" 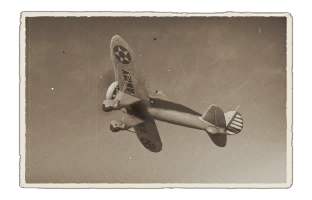 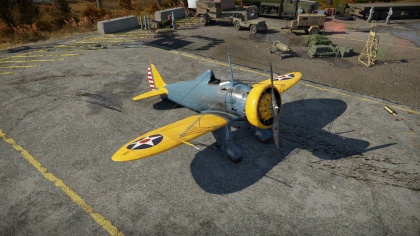 The P-26A-33 Peashooter is a rank I American fighter with a battle rating of 1.0 (AB/RB/SB). It has been in the game since the start of the Open Beta Test prior to Update 1.27.

The P-26A-33 Peashooter is a reserve monoplane for the US Faction in War Thunder. The P-26 series are the only reserve monoplanes available to new players other than the D.37s and D.500 aircraft in the French tech tree. The differences between the P-26A and P-26B variants are negligible however, including the B variant receiving a fuel-injected engine.

The P-26A-33 can be outfitted with the following ordnance:

Like most US fighters, the P-26A-33 Peashooter is a decent energy fighter even though its high lift creates unstable diving characteristics. Despite being a monoplane, the P-26 is not the fastest reserve fighter. In most regards the P-26A-33 will be outmatched by enemy fighters; for example, the Japanese Ki-10s will not only turn circles around the P-26A-33 but will out-climb it and out-run it too. However, the slow German He 51 makes an easy target for a P-26A. P-26 pilots should instead focus on attacking and harassing enemy bombers.

A single-seat, all-metal braced monoplane fighter with an open cockpit and non-retractable landing gear in its fairings. It was designed by the design office of the Boeing Company. The XP-936 (Model 248) prototype made its first flight on 20 March 1932. The aircraft was accepted for service with the USAAC under the designation of P-26А. Full-scale production was started at the Boeing plant in Seattle in December 1933. The first production P-26А (Model 266) got off the ground in January 1934.

The P-26А's armament consisted of two synchronous 7.62 mm Browning M1 machine guns with 500 rounds each. The machine guns were mounted below the forward fuselage, and they fired through the arc of the spinning propeller. A C-3 gun sight was fitted in front of the cockpit. A G-4 gun camera could be installed over the right wing's centre section.

Under the centre wing sections, an A-3 bomb rack that could carry either two 100 lb (45 kg) high-explosive bombs or five 30 lb (14 kg) fragmentation bombs could be mounted.

Externally, production P-26Аs differed from prototype machines in their wing panels with elliptical tips and short landing gear fairings. Changes were introduced into the wing design, and a radio set was installed. An antenna mast was mounted on the starboard side, in front of the cockpit.

The first P-26А fighters were transferred to the 20th Fighter Group located at Barksdale Air Force Base, Louisiana. The P-26 was nicknamed the Peashooter by pilots.

Operational pilots praised the fighter's great flight characteristics, such as its rate of climb and excellent manoeuvrability. Pilot complaints included poor forward visibility during taxiing and takeoff, as well as by landing difficulties. Taxiing out to the start line in the S-curve became a standard Peashooter manoeuvre to reduce the takeoff accident rate.