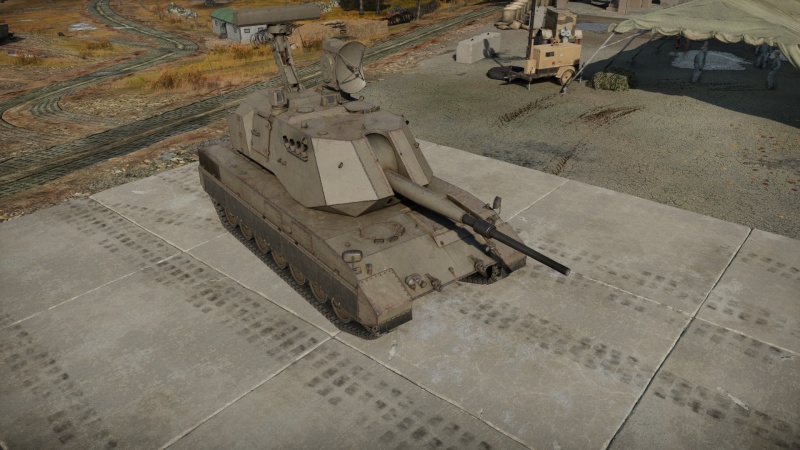 The OTO Main Anti-aircraft Tank for Intercept and Combat (shortened to OTOMATIC) is a rank VI Italian self-propelled anti-aircraft gun with a battle rating of 10.3 (AB/RB/SB). It was introduced in Update 1.85 "Supersonic".

The OTOMATIC is a radar-equipped SPAAG that is capable of shooting proximity fused frag rounds and can destroy planes even in a single, well-aimed shot. Shooting down aircraft should be the primary use of this vehicle at least until APFSDS rounds are unlocked, so staying in a cap zone is recommended, as the unit doesn't carry a lot of ammo (90 shells for a cannon with a 0.5s reload). When APFSDS are available, the OTOMATIC may defend capture points against enemy tanks as well, while still dealing with aircraft, or it can switch to a more mobile, MBT-like playstyle, mostly thanks to the excellent penetration of the sabot rounds and the two-axis stabiliser.

76 mm OTO Breda Cannone da 76/62 cannon
Two-plane stabilizer
Reduces the swing of the gun in two planes while moving
Autoloader
Automatically feeds projectiles into the breech. The speed does not depend on the skills of the loader
Ammunition90 rounds
Reload0.5 s
Vertical guidance-5° / 60°
Main article: OTO Breda Cannone da 76/62 (76 mm)
The OTOMATIC is armed with the most famous naval autocannon, the OTO Breda Cannone da 76/62. This specific configuration is the Compact version, meaning the carousel is smaller for size reduction but with an increase is ROF. This particular gun, if already used in vessels, has one of the best tradeoff in accuarcy, stopping power and range. Different from other cannons, the 76mm is the biggest anti-air caliber yet the smallest caliber for modern vehicles. The version mounted on the OTOMATIC is set to super-rapid fire, speeding the ROF from 60 RPM to 120 RPM. This has its own pros and cons. From one side you have a tremendous stopping power which can deal with all threats in seconds, including ground. However, on the other side, you devore ammunition when doing continuous fire, getting from 90 shells to 60 in a matter of seconds.

The OTOMATIC has access to both anti-air and anti-tank ammunitions capable of dealing with a high variety of threats, from lightly armored IFV's to heavily armored MBT's.

The Semi Armor-Piercing High Explosive Incendiary rounds has a multipurpose capabilities with a little bit of everything. It has a nice tradeoff between anti-air and anti-tank capabilities due to the explosive mass and armor penetration. However, the SAPOM is not really suggested for anything rather than anti-tank roles as the HE-VT* is more than capable of dealing with enemy threats. It should be notted most of the targets faced can be killed from the sides if shot between the road wheels in the lower half of the chassis (in case for NATO tanks), engine deck (will only cause fire and damage to transmission), Gunner's Primary Sight (in case of M1 Abrams and XM-1's). When it comes to dealing with Russian targets (the most generally armored MBT's in the game), SAPOM should be fire almost at the ground hitting the lowest part of the chassis. It is recommended to destroy their tracks and barrels in order to let friendly units take them out for this reason. SAPOM is capable of destroying all lightly armored targets seen at the battle-rating (IFV's, SPAA's, etc).

The dart ammunition has a full anti-tank role though it can be used for anti-air roles, however it is not recommended. It has decent penetration and stopping power as a dart and is more than capable with dealing enemy tanks. It is able to destroy enemy targets in one hit if it's a well placed shot. Ammunition should be targeted with the APFSDS as the low ammount of ammunition carrying can make it run out of APFSDS before destroying the enemy. Trapshots are suggested (driver's port, cupola, mantlets, etc).

The High Explosive Variable Time fuze proximity shell has a full anti-air role with zero anti-tank role. Thanks to the high caliber, the HE is able to carry a proximity fuze with a lethal explosive mass, making it capable of destroying all aerial threats with one or two hits. Trigger discipline is recommended as, due to the fast fire rate, the OTOMATIC can spend the whole ammunition reserve really fast. Thanks to being a big shell, most enemy helis and aircraft will not redirect course when being fired at until it's too late compared to the continious fire smaller caliber SPAA have (25mm, 30mm, 35mm, 40mm, etc). They do not trigger Missile Alert Warning, making them the ultimate helicopter killer. 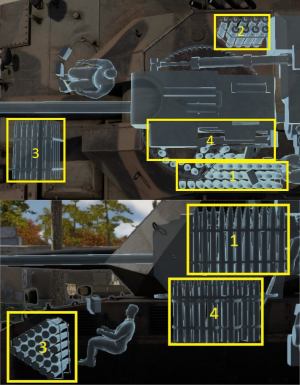 Ammo racks of the OTOMATIC

The OTOMATIC is one of the more role-diverse SPAA in the game, akin to that of the ADATS with its anti-air/anti-tank missiles. However, the OTOMATIC can practice these diverse roles without needing to notify the enemy of what role it is prior to an engagement. The OTOMATIC has the mobility, speed, armor and electronics to make it one of the best SPAA or anti-tank vehicle, depending on what the commander or battlefield situation dictate.

The OTOMATIC has a big ammo rack with three types of ammunition for all types of players, for those who want to be deadly to only aircraft and control the skies as quickly as possible, and for those who want to carry out as much destruction as possible regardless if they want to go anti-air or anti-tank. The only drawback is that the OTOMATIC can only carry 12 APFSDS rounds. The recommended round load is 50 HE-VT*, 20 SAPOM, and 12 APFSDS for both anti-air and anti-tank capabilities. Each of these rounds are well-suited for the targets they are specialized to fight against.

This round makes nailing aircraft such an easy task, though it has its pros and cons compared to missiles that other high-ranking SPAA are using. As a con, a HE-VT* shell carries less explosive power, cannot be guided, and has a slower muzzle velocity compared to missiles. However, the HE-VT* as a shell will not trigger the aircraft's Missile Approach Warning system (MAW) and so the enemy may be caught unaware of an incoming 76 mm HE-VT* shell if they do not see it coming. The only visual cue they would have is the flying tracer round, compared to a missile smoke streak that may be traced to the firing SPAA vehicle. The larger number of HE-VT* shells carried also means the OTOMATIC can quickly follow-up a shot if the first shot missed, without too much worry on ammunition waste.

This round helps make the OTOMATIC one of the more reliable SPAA at the top-rank battlefield. A missile would cause hovering aircraft like helicopters to simply find cover as soon as the MAW is activated. Top-rank SPAA that uses missile also have a reliance to their radar lock, as it must maintain that lock for the missile to track and hit the target. The OTOMATIC also has access to thermal sights and a laser rangefinder to help locate aircraft in the air and find their range without use of the radar. With this, the OTOMATIC can track a helicopter and find their distance without the enemy helicopter being aware that they are within the OTOMATIC's sights and firing range.

This round provides some flexibility in the usage of the OTOMATIC. It is a Semi Armour-Piercing High-Explosive Incendiary (SAPHEI) round that does not have the penetration values of a likewise APCBC round, while also not having as much high-explosives as a dedicated HE shell. However, this round in the 76 mm calibre does still present some general-purpose uses. While there is enough high-explosives in the shell to use against an aircraft, the presence of the HE-VT* shell makes this role redundant by a more capable shell. The shell can fight enemy armoured fighting vehicles, but a maximum penetration of 60 mm at point-blank range means this round will struggle against any main battle tanks fought at the OTOMATIC's battle-rating. Nevertheless, as the only armour-piercing round available to the OTOMATIC before it unlocks the APFSDS, it must be used with caution, patience, and practice for maximum efficiency.

Arguably one of the best use of the SAPOM round is as a reserve so that the valuable 12 APFSDS that can be carried in the OTOMATIC is not wasted; or in the worst case all HE-VT* is spent. As such, its use should be reserved to fighting lightly-armoured vehicles, when out of APFSDS against ground units, or out of HE-VT* against air targets.

Generally speaking, try and avoid combat with CSTO MBTs if the OTOMATIC only has SAPOM rounds available, unless it is mission-critical that the enemy tank must be immobilized or disabled.

This is probably the most used round by the OTOMATIC when it is being used for anti-tank purposes. This is the same round the Rooikat uses, meaning it is a reliable round with good capabilities, but does require trigger discipline, situational awareness and knowledge of the enemy tank's "anatomy" to make every single round count as there are only 12 round carried. While the APFSDS round has nowhere enough penetration power to deal with enemy MBT, it does have enough to penetrate weakpoints and from favorable angle-of-attacks.

Development of the OTOMATIC SPAAG began during the mid 1980s as a private venture of the OTO Melara company. The basic concept behind the OTOMATIC was to take the successful 76 mm Super Rapido utility cannon used on naval vessels and fit it to a suitable mobile platform in order to create a long-range SPAA vehicle that would outmatch similar designs such as the German Gepard or British Marksman system. Although a challenging feat, Italian engineers eventually succeeded in this endeavour, creating a vehicle that wasn't only up to the latest technological standards but also perfectly suited, and even exceeded, various NATO requirements of the time. The first prototype of the OTOMATIC was ready for testing in the late 1980s. Intended to be compatible with a large number of NATO vehicles of the time, the OTOMATIC, similarly to the British Marksman system, was tested on several hulls and it was planned to be capable of fitting any NATO tank, including the Leopard 2 and M1 Abrams. However, as the Cold War ended and general interest for SPAAG vehicles began declining in favour of more modern missile systems, the OTOMATIC project never received any interest from potential users. For the Italian army, the project was initially accepted, but later abandoned due to budget cuts.

Ships equipped with the same gun