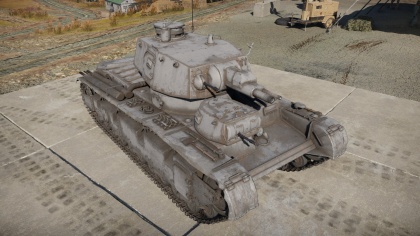 The Neubaufahrzeug is a premium rank I German medium tank with a battle rating of 1.3 (AB/RB/SB). It was introduced in Update 1.51 "Cold Steel".

The Nebaufahrzeug has even higher survivability than Panzer III/IV tanks at similar battle ratings, due to its size and relegation of crews to several turrets. The armour on it is actually rather thin, despite it looking very imposing and being trolly in layout. It has six crew members: a driver, two machine gunners in small independent turrets, a gunner, loader, and a commander in the main turret where the pair of weapons are located. The front armour thickness ranges from just 13 mm to 20 mm, making it possible to immobilize it with .50 calibre machine gun fire frontally.

The top speed of the Nb.Fz. is 28.5 km/h, which is slow for low-tier ranks. The power-to-weight ratio, on the other hand, is rather good at 11.9 hp/ton, giving it a very nice acceleration considering how large it is. But, this is relatively slow, so remember to stay in cover, because tank destroyers can destroy this vehicle's armour relatively quickly and easily.

The Nebaufahrzeug's main armament is the KwK37 cannon, which shoots APHE, penetrating up to 52 mm of armour, 80 mm penetration HEAT, and smoke rounds. Problem is, due to the current limitations of the game, it is impossible to take more than four different kinds of shells, and for multi-gun tanks, each gun can just pick two shells in its repertoire. So the practical combinations would be either APHE+HEAT, APHE+smoke, or HEAT+smoke. 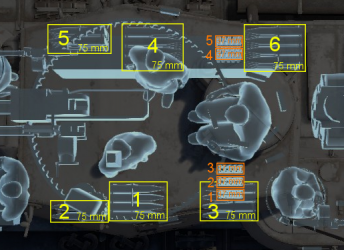 The Nebaufahrzeug also has an additional second anti-tank gun in the main turret: a 37 mm KwK36, located to the left of the 75 mm cannon. This shoots either 47 mm penetration APHE or 91 mm penetration APCR rounds. It is decent, much like the same gun on the Pz.III B and Pz.III E, but is best used as a backup to the 75 mm between reloads on that. It shoots at far higher velocities than the 75 mm, so it is more suited to long-range engagements.

The Nebaufahrzeug also holds three small-caliber MG13 Dreyse machine guns, which are similar to the MG34 and use the same belts. At best, they're good for strafing flak trucks, but in practicality, they're almost useless since the two MG turrets have very poor turret traverse.

The Neubaufahrzeug was a prototype of what was to come with German heavy tanks. Historically, they were slow, heavy, and complicated. Not thought of as successful, only 5 were actually built. 3 of these tanks were sent to Norway at the start of the war, but only 1 of the 3 saw action. They were mostly used for propaganda.