Difference between revisions of "N1K2-J" 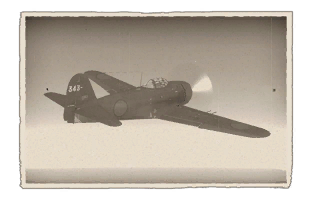 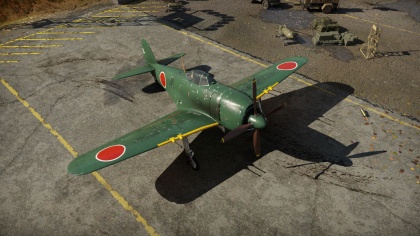 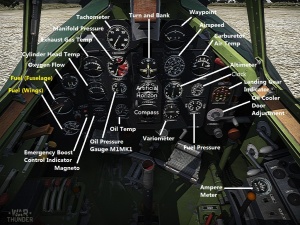 Cockpit features good all-round visibility. The quite high mounted gun-sight allows for good sight in deflection shots, if a bit of rudder and aileron are applied.

The N1K2-J is a versatile plane that has its great acceleration and rate of climb as the main advantage. It lacks the impressive low-speed manoeuvrability of its preceding plane in the Japanese research tree, but it can still turn against most of its fighter opposition and win the engagement. The N1K2-J's battle rating presents the potential challenge of flying against fighter jets, against which N1K pilots will have to use their high sustained rate of climb, not to be left low and vulnerable against faster enemies, as well as to use their turning ability far superior to that of the average jet.

The N1K2-J can be outfitted with the following ordnance:

The N1K2-J is a very tricky aircraft to use. It is a little over-tiered at 6.0, meaning it can face early jet fighters such as the F-80A-5, Yak-15/17, He 162, J/A21R, and in Arcade, the F-84B-26. These jet aircraft hold a hefty speed advantage over the Shiden-Kai, but typically have very poor maneuverability, meaning the N1K pilot can abuse its excellent handling at medium speeds and shred the previously mentioned jets if their pilots are foolish enough to try and turn-fight. The one exception to this is the Yak-15, which retains the turning abilities of its airframe; the Yak-3. However, the Yak-15 suffers from a relatively low top speed and climb rate for a jet, along with sub-par vertical energy retention. Above all those, it's ammunition pool is abysmal at only 120 rounds total, meaning the N1K2 pilot could potentially win an engagement just by remaining difficult to hit.

Although it can fight admirably against jets, the N1K2-J will find itself coming up short against many of the other nation's top tier Superprops. It cannot keep up with the P-51H, F4U-4B, F8F, I-225, La-9, Tempests, Griffon Spitfires, G.56, late Bf 109's or Fw 190 D's of its tier. Fortunately, most of the previously mentioned aircraft cannot turn with the N1K2, so the Shiden-Kai can use its superb mid-speed maneuverability to turn circles around its opponents. The main exception to this is the uncommon G.56, which is the closest thing the N1K2 has to a hard counter. It can turn with it, outspeed it, out-dive it, beat it in an energy fight and shred it with triad of MG 151/20's, so it is highly recommended to either avoid the G.56 or take it out while it's preoccupied with a teammate.

The N1K2-J can take on a relatively new role for Japanese fighters; a fighter/bomber. With its ability to mount up to 4 250 kg bombs or two of the massive Type 5 No.6 rockets, the N1K2 can be Japan's best ground attacker and will make enemy tanks quake in fear. The Type 98 Number 25 bombs are roughly equivalent to the American AN-M64A1 500 lb bombs, and are all mounted on wing racks, allowing for precise bomb placement on targets. On the flip-side, the Type 5 No.6 rockets have no direct comparison but play somewhat similarly to a watered-down American Tiny Tim rocket or Swedish M/49 rocket. Despite their relatively low velocity and higher weight, they are still quite accurate and are able to be launched quite close to the target with minimal threat of self-damage.

A single-seat, all-metal monoplane fighter with a closed canopy. The "Shiden" holds a unique place in the history of airplane construction. This land-based interceptor was based on the N1K1, which had been designed to support amphibious operations.

The first prototype N1K1 "Kyofu" ("Mighty Wind") was flown on May 6, 1942, and mass production began in May of 1943. However, when the first seaplanes started to arrive on the front, the situation in the Pacific theatre had changed so that this type of plane was simply no longer needed. Therefore, a land version project of the fighter was developed as a private initiative, based on the Kyofu. Originally it was planned that the only distinction between the two planes was that the Shiden-Kai would have retractable landing gear instead of floats, but it was quickly decided that the engine should be replaced with a more powerful alternative. A four-bladed propeller with a diameter of 3.3 meters was selected for the plane. Such a large propeller size, along with the mid-wing aerodynamic design, forced the plane to be fitted with elongated, telescoping landing gear struts which folded during retraction.

The land-based version made its first flight on December 12, 1942. The prototype's private designation was the X1, and in mass production its designation became N1K1-J "Shiden" ("Purple Lightning"). Production began in August of 1943.

The new fighter proved to be an excellent interceptor. However, its operation was complicated by the frequent failure of its engine, the Homare 21, the complex design of its chassis, and its ineffective brakes. Consequently, the number of the N1K1-J's non-combat losses was very high. The next model of the Shiden was designed to eliminate these shortcomings.

The aircraft's redesign began simultaneously with the N1K1-J's military trials. The N1K2-J's first flight was made on December 31, 1943. The production model was designated the Shiden-Kai ("Purple Lightning Improved") Model 21 Marine Fighter-Interceptor.

The new model, like its predecessor, featured a 14-cylinder air-cooled radial engine, the Nakajima Homare 21 NK9H, with a takeoff power of 1820 hp. It also retained the basic wing construction and armament of the N1K1-J. However, the Shiden-Kai was really a new plane. During the planning phase, special attention was given to ensuring ease of production and, at least to some extent, the use of readily available materials. The Shiden-Kai, unlike its predecessor, had a low-wing design which allowed the use of conventional landing gear. The new design was finally rid of the N1K1-J's main operational problems.

The shape of the fuselage was completely changed and somewhat lengthened, and the vertical tail fin was completely redesigned. The empty weight of the aircraft was decreased by 240 kilograms.

On the two pylons suspended underneath its wings, the aircraft could carry two 250-kg type 98 or two 60-kg type 97 bombs. Or, it could carry unguided 60-kg No.27 rockets. In addition, an extra 400-litre fuel tank could be installed under the fuselage.

Because its centre of gravity was towards the plane's rear, the N1K2-J was somewhat difficult to control, and was usually flown by experienced pilots (especially former Zero pilots) after they underwent retraining.