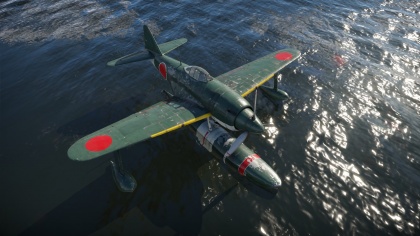 The N1K1 Kyofu is a rank II Japanese hydroplane fighter with a battle rating of 2.7 (AB/RB/SB). It was introduced in Update 1.65 "Way of the Samurai". The N1K1 can be a great low tier fighter. Even though it's flight characteristics may seem poor at first, there are several ways you can improve them.

The N1K1 doesn't have great flight characteristics. With an average turn time and rate of climb, it can struggle against other planes at it's BR. However, removing the floats can significantly help it's turn time.

The survivability is to be expected of japanese planes. With non-effective self-sealing fuel tanks, you won't survive a lot of shots, specially if you catch on fire.

If someone is to use this aircraft in battle, he must take advantage of his guns. They can be pretty punchy, so boom-and-zoom attacks would be reccommended. You should avoid turn-fights, specially with british aircraft, though you should be able to outturn some german aircraft.

If you want to go for a more risky approach, you could take of the floats, thus significantly improving your speed, climb rate and turn time.

The N1K1, though adequate for most situations, can be a pretty difficult aircraft to master. It's poor turn times and climb rates can make you vulnerable at low altitude. The pilot must take advantage of the guns on the aircraft for bomber interception or boom-and-zoom tactics, or take a gamble and remove the floats.

[1] Guide on how to remove the Kyofu's floats (may not work everytime).