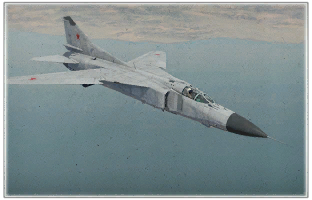 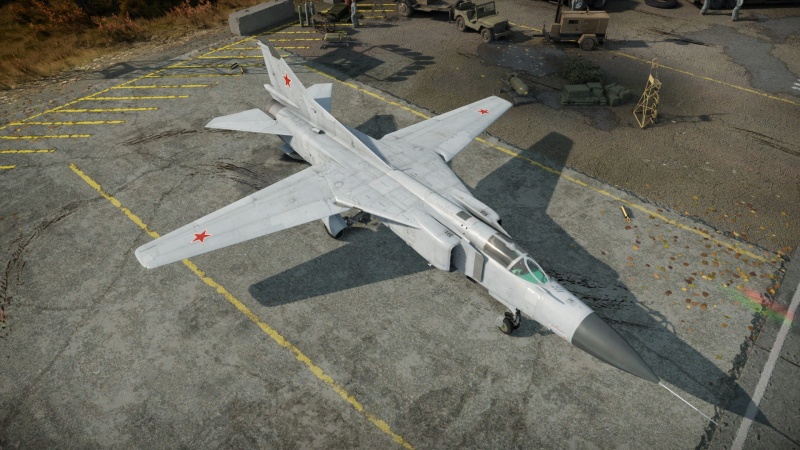 The MiG-23M is a rank VII Soviet jet fighter with a battle rating of 11.0 (AB/RB/SB). It was introduced in Update "Red Skies".

The MiG-23M is the first version of the MiG-23 to see wide operational service. It is a very different plane from the preceding MiG-21bis, with variable sweep wings, side air intakes, sophisticated avionics, and access to R-23 missiles with good range. The MiG-23M is the first Soviet fighter with a real BVR capability and pilots can enjoy using R-23R missiles for long range radar-guided jousting or R-23T missiles for IRST-cued sneak attacks. It is no slouch in close quarter engagements either, where lower wing sweep settings give it great sustained turning capability and its all-aspect R-60M missiles can do good work. As to be expected however for an early variant of such a revolutionary aircraft, it is a bit rough around the edges: the thrust-to-weight ratio is worse than the MiG-21bis, it is not great at short-term turning, and it has a limited supply of only 12 large-caliber countermeasures. Still, it brings a lot of new features to the table, and Soviet pilots who master it will be very pleased with the succeeding MiG-23MLD.

The MiG-23M can be outfitted with the following ordnance presets:

Two different tactics are recommended when flying the MiG-23M:

No matter which tactic though, it is recommended to engage your enemy from their front hemisphere, since you can carry all-aspect IR missiles. This way it leaves your enemy less time to react and dodge the missiles.

Also, since both the R-60Ms and the R-23Ts have a relatively wide FOV, it is recommended to lock the enemy using your IRST before engaging the missile lock to slave the missile, and better utilise their wide FOV.

Only use the R-60Ms at close range, around 1.5 km. They perform best under such range, and it also gives your enemy less reaction time to release the countermeasures, since R-60Ms are easily tricked by flares.

When in a 1v1 situation, try to use your great low-speed performance to trick the enemy into low speeds, especially when against Phantoms. When your speed drops below 400 km/h, manually control the wing to the most frontal position to improve your manoeuvrability.

The Shooting Range #255 - Metal Beasts section at 00:25 discusses the MiG-23M.
How To Use IRST (Infrared Search and Track) - TeaRex