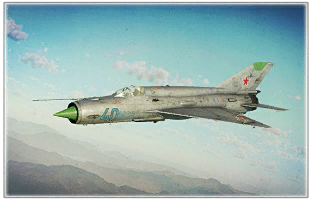 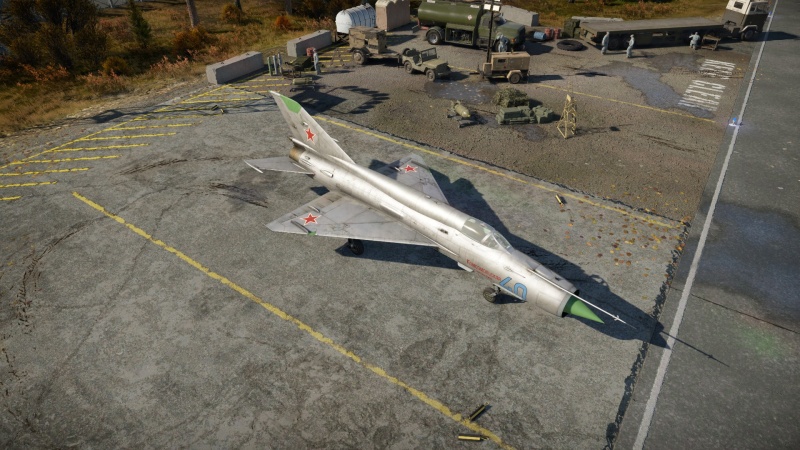 The MiG-21bis is the ultimate Soviet development of the MiG-21. It looks roughly the same as the MiG-21SMT and MiG-21MF, both third-generation MiG-21 models with search radars, internal GSh-23 cannons, and pronounced fuselage spines. The main improvement in the MiG-21bis is a new R-25 engine with an emergency afterburner stage outputting more than 9,000 kgf of thrust in optimal conditions, granting excellent acceleration and climb rate for a single-engine fighter. The armament remains similar to the MiG-21SMT, but has the option of new R-13M1 infrared missiles similar to the AIM-9G and can carry an additional two R-60s for a maximum of six. Although the MiG-21bis has weak BVR capabilities and lacks the dogfight-tuned airframe of the J-7E, it can still be a powerhouse in close combat for pilots who use its strong engine power, good missile capacity, and ability to pull high AoA turns.

The MiG-21bis has absolutely phenomenal acceleration and high-speed performance making it one of the highest-performing aircraft in the game. Firstly, the aircraft is quite fast, being able to reach 1365 km/h IAS on the deck (at low altitudes) before its wings rip - this means that it is usually capable of outrunning most enemies at its rank, such as Phantoms and the Mirage, with the exception of the F-104 Starfighters which can outrun the MiG-21bis by a small margin. Secondly, the aircraft has the fastest overall acceleration of any aircraft in the game, meaning that it can reach its top speed quickly. However, like all other MiG-21s, the MiG-21bis cannot turn well and tends to bleed speed at an alarming rate during turns. Extended dogfights should therefore be avoided, as the MiG-21bis will often end up on the losing side.

The MiG-21bis has a strong set of control surfaces including an all-moving tail, which keeps the aircraft responsive up to high speeds (>1,300 km/h). However, be aware that the aircraft has two limiting structural factors: the wings' rip speed and structural G limit. Wings will rip at 1365 km/h IAS, a speed the plane can reach relatively quickly given its phenomenal acceleration. The structural limit of 13G means stronger turns should thus be avoided as there is a risk that they will rip the aircraft's wings.

The MiG-21bis is armed with:

The 23 mm GSh-23L are adequate cannons, firing at a high rate of fire. However, the individual rounds from the cannons have a low stopping power, necessitating many hits on target to destroy them.

The MiG-21bis can be outfitted with the following ordnance presets:

This plane is fairly manoeuvrable at high speeds and since it accelerates quickly and climbs extremely well, it works well as an interceptor (take off, reach around 1,000 km/h, burst climb at a 20-25 degree angle up to 6,000 or 7,000 m and fire on anything that can be sighted) but this method has some risks.

First the MiG-21bis is prone being hit by a Matra R530E or the infamous AIM-7 SARHMs (Semi Active Radar Homing Missiles) that can easily shoot the MiG-21bis down since the plane becomes a brick at higher altitudes.

And sometimes, even if the MiG-21bis succeeds in its interception objective, some enemies will fly in a different path, so they'll easily sneak up behind the MiG-21bis and take it down with missiles if it is high and slow enough.

The third, and probably safest, way to play the MiG-21bis is to flank around the main fighting area. Side-climb up to around 4-5 kilometres in the air, making sure to avoid the frequented flight paths so the MiG-21bis does not appear on their radar (additionally, turn off the MiG-21bis' radar during this climb so that the enemies' radar-warning receiver does not pick up the MiG-21's radar as well). Idle around the sides until the main body of the enemy team is spotted and then begin turning towards the battlefield to begin engaging targets. As the MiG-21bis returns, keep an eye for any enemy planes that have a similar idea of flanking around. This scenario usually compose of only one enemy fighter climbing up, which a skilled MiG-21bis pilot can begin engaging in their favor if they have a height advantage. However, if two fighters appears, it is best to break off and move towards the vicinity of allies to help engage.

A more risky but rewarding playstyle is to use (2xR-13M-1 and 4xR-60) or (4xR-13M-1) and take advantage of MiG-21's 225m/s climb rate, which in theory, is superior to even the F-4K and F-4M (FG.1 and FGR.2). Radars on most jets can scan ~15 degrees above the horizontal, and by climbing at Mach 0.90-0.95, it is possible to 'fly above the radar' and remain undetected at BVR ranges. At high altitudes, the R-13 can be launched at 3km in a chase and even farther in a dive against lower targets. Although the MiG-21 has a substantial advantage in transonic manoeuvrability, the MiG-21's delta wings cause significant energy bleed in turns as mentioned above. Making high-speed diving attacks is certainly a valid tactic, and fighting from high altitude downwards makes situational awareness easier as most enemies will be at lower altitudes rather than in all directions. This playstyle is most suitable for principled Phantom pilots who are accustomed to maintaining a high energy state.

Enemies to beware of:

The MiG-21bis is equipped with a Sapphire-21 search and tracking radar. The radar is mounted in the nose of the aircraft.

By the late 1960's, the Soviet high command sought to increase the effectiveness of the MiG-21 jet fighter, especially at lower altitudes, while at the same time knowing that this could only be achieved by developing a more powerful engine for it. As a result, in 1971, the order to develop what would essentially become the MiG-21bis was issued by the Soviet high command.