Difference between revisions of "MiG-21PFM" 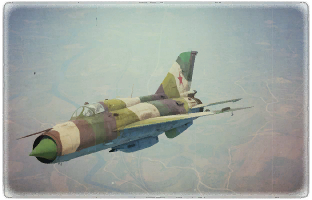 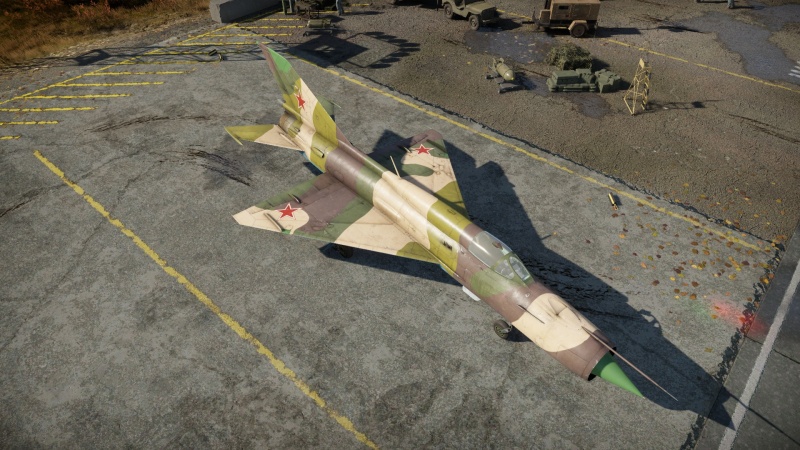 The MiG-21PFM has flight performance that is relatively characteristic of the overall MiG-21 family. It has strong acceleration and great climb rate at it's BR allowing it to outclimb and outrun almost every aircraft it encounters. The aircraft has slightly upgraded performance over the prior MiG-21F-13 with a better climb rate. However, the aircraft has one major disadvantage, being it's turning ability. While it can certainly turn, the MiG-21PFM suffers from an absolutely terrible MER (Maneuvering Energy Retention) that will make it bleed over half of it's speed in turns. Thus, extended turn fights are not advised as the MiG-21 will be left slow and vulnerable to a follow-up missile attack. The MiG-21 has a strong set of control surfaces including an all-moving tail, which keep the aircraft responsive up to higher speeds (>1300 km/h). However, be aware that the aircraft has two limiting structural factors - firstly, the aircraft will rip it's wings at 1300 km/h IAS, which it can reach at lower speeds. Secondly, the aircraft has a 12-G structural limit. Thus, stronger turns should be avoided as there is a chance that they will rip the aircraft's wings and send the pilot to a fiery demise.

The MiG-21PFM does not have more than the basics to ensure its survival.

Armour is paltry for the pilot, with a 60 mm bulletproof glass in their direct front cockpit window, and a 10 mm steel plate behind the pilot's head. The rear armour plate is not in an ideal location either; shots aiming for penetrate that plate from the front will go through the pilot (knocking out the plane instantly). If shots to the plate come from the rear, the tail or fuel tanks are going to be hit first before the pilot, which can cripple the aircraft.

All fuel tanks on the MiG-21PFM is self-sealing, which is good news if the aircraft gets grazed by a heavy machine gun bullet. However, the fuel tanks make up a good portion of the aircraft surface area inside the thin fuselage and the wings. A hit by a cannon at any of these locations, if they do not cripple that area of the plane, will certainly light one of the fuel tanks on fire and cause devastating damage that will more likely than not spread and destroy the plane.

The MiG-21PFM does not have flares neither any radar warning receiver. This means the MiG-21PFM has a distinct disadvantage when fighting against enemies with infrared missiles, radar, or radar-guided missiles. A pilot needs to constantly keep an eye out of their rear from any enemy firing an infrared missile, and their direct front/sides for any aircraft firing a SARH missile.

Damages to the engine are also not sustainable, as there will be significant loss in plane control. If a pilot is not flying the MiG-21PFM at a high-enough altitude, there's a more than likely chance the plane will descend into the ground.

The MiG-21PFM is armed with:

The 23 mm GSh-23L cannon is attached to the MiG-21PFM as a gunpod at the belly, similar to the 20 mm M61 cannon on the F-4C. Unlike the F-4C, however, there is no option to remove the gunpod to focus on suspended armaments.

Despite the odd configuration, the armament firepower is not any lacking compared to the other MiG-21 variants, having more ammunition than the MiG-21F-13's 30 mm and identical to the MiG-21SMT's identical 23 mm in an internal mount. As such, new pilots simply need to compensate the odd firing angle of the belly-mounted gunpod to make the MiG-21PFM work in a dogfight.

The MiG-21PFM can be outfitted with the following ordnance:

Described as the "AK of airplanes", the MiG-21 is a robust, reliable, and easy to maintain jet fighter developed during the second generation of jet fighters that has since the 1950s earned a strong place in air forces of the Soviet Union as well as foreign operators such as North Korea, India, and Croatia. With many variants, the aircraft has had many life extensions over this 60+ year period of operation, with some aircraft in air forces having been in service for more than 30 years.

The story begins in 1953, when the Soviet government issued a requirement for a lightweight aircraft capable of Mach 2 for its Frontal Air division of the Soviet Air Force. Having had experience in the field of swept-wing, fast jet fighters Mikoyan-Gurevich felt confidently about their ability to produce such an aircraft. An aircraft such as the MiG-21 was only able to come to fruition after multiple test models and research with various prototypes. Beginning with the Ye-1 the Mikulin AM-11 turbojet was fitted, which in turn created another model called the Ye-50. This second one-off prototype was essentially a Ye-1 with the addition of the AM-9Ye turbojet in place of the AM-11, as well as adding liquid-fuelled rocket boosters for added thrust. After the initial prototypes, the Ye-2 was designed with the idea of using the original AM-11 turbojet, but was left waiting and soon opted to use the AM-9B found on the existing MiG-19 "Farmer" series of aircraft also produced by Mikoyan-Gurevich. This third aircraft was leads ahead of the previous models, having had development so far along that on February 14th, 1955 it took to the skies for the first time. This aircraft had good results, but was also slow as well leaving much to be built upon. With this, a similar aircraft called the Ye-4 was built and flown on June 16th that same year. This aircraft had many design implementations found on the final MiG design, such as the small-area delta wings and conventional tailplane. However, this prototype wouldn't be much of an improvement over the previous prototypes, only proving marginally better in terms of performance. With the first flight of both the Ye-5 and Ye-501 prototypes occurring on January 9th, 1956, Mikoyan-Gurevich was confident production would begin soon and issued two company designations for each model. These being MiG-21 for the delta-wing modification as well as MiG-23 for the swept-wing design, the latter not to be confused with the swing-wing supersonic aircraft also built by MiG.

The western world would finally get a peek at this development on June 24th, 1956 when variants of each design flew over during the Aviation Day celebration at the Moscow Tushino airfield. Taking notice of this, NATO and western observers would quickly take note, leading to NATO giving the codenames "Faceplate" and "Fishbed" to the swept and delta wing designs respectively. Development didn't end there however, as more prototypes were built and flown. Three Ye-6 aircraft were soon seen wearing the tailed-delta wing design seen on the previous Ye-5 but featuring clipped wingtips as well as a redesigned nose cone. With flight testing underway by May 20th, 1958, it was soon brought to a halt when the Ye-6/1 prototype lost its engine during a test flight. An effort was made by the test pilot to get it restarted but was in vain as the aircraft was lost, with the test pilot following shortly after injuries sustaining from the accident. However, with these setbacks testing and development would soon turn into production as the aircraft soon succeeded the requirement set by the Soviet government, hitting a speed of Mach 2.05. Production forms followed, and the western world would get a look in 1961 during a public appearance at the final production version of the MiG-21. The MiG-21 served continuously in the Soviet Air Force, and later the Russian Air Force, for many years following its introduction, orders and deliveries having been placed in 1957 that continued into the next year. While in service, the aircraft would first get the designation MiG-21F in 1959, and the aircraft would have a fruitful career with Russia as well as many foreign operators.

One notable example of the MiG-21, built off of the PFS airframe, was the PFM. This aircraft featured many improvements and reductions from the existing airframe. While retaining its ability for unpaved field operations this design featured the removal of the internal mounted gun under the nose. This variant also featured the addition of an inflated fuselage section behind the new split canopy design allowing for more space for electronics as well as fuel tanks within the fuselage. Stated before, it was designed without and internal gun forcing the aircraft to rely on suspended armaments such as missiles, rockets such as the RP-21M, and a belly-mounted GP-9 gun pod. Seeing production for the Soviet Air Force in Gorki from 1964 to 1965 and foreign production and export in Moscow from 1966 to 1968, the MiG-21PFM saw great success with foreign operators, seeing extended use throughout the years with air forces such as Poland, India, and Egypt in addition to the Soviet Union.

During the modernization of the second generation of MiG-21 fighters, the Soviet military authorities demanded the design team to modify the aircraft for takeoff and landing from unpaved airfields. As a solution, the engineers proposed equipping the aircraft with a system for blowing the boundary layer from the flaps, and the Tumansky and Metskhvarishvili design bureau began developing a version of the R11F-300 engine with an air stream from the compressor. The boundary layer blowing system significantly improved the take-off and landing characteristics of the aircraft, the takeoff and run lengths were reduced, and the landing speed drastically reduced. Along with other modifications and improvements, the serial modification of the MiG-21 with the boundary layer blowing system began to be produced under the MiG-21 PFS index, later upgraded to the MiG-21 PFM version. Aircraft of this modification were produced in fairly large numbers since 1964, both for domestic use and export. The MiG-21 PFM served in Vietnam and Afghanistan.

Should You Grind the MiG-21PFM? - Review/Buyer's Guide - theScottishKoala
The Worst Jet In The Game: MiG 21 PFM Review - Sako Sniper

Other members of MiG-21 series