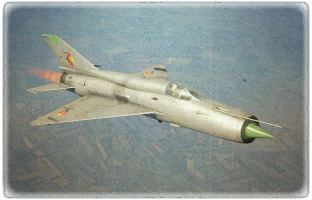 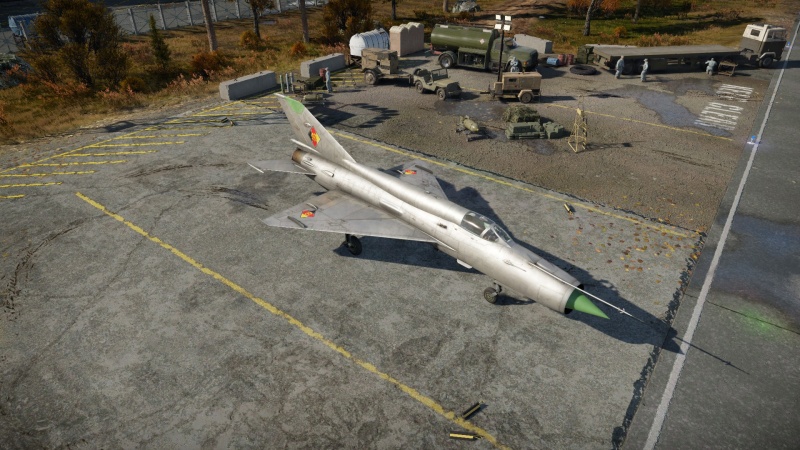 It is a single-engine delta-wing supersonic interceptor with conventional tail and fully-moving elevators. As of Update "Hot Tracks", it is the only German plane able to carry air-to-air missiles better than AIM-9B/R-3, the only plane with ballistic computer, and the only plane above BR 10.0.

The ▀MiG-21MF has mediocre flight performance in every aspect among top rank jets. It will get out-accelerated by British Phantoms or MiG-21 bis, outturned by Draken or Mirage, and out-sped by 2nd gen US Phantoms (F-4E/EJ), Starfighters or MiG-21 bis. The delta wing provides great angle-of-attack (AoA) while turning but it also mean the plane loses huge amount of speed doing so. This means that staying behind enemy in 1 vs. 1 is fairly simple, but when there are multiple bandits one might loose all their speed and become an easy missile target if turning too much.

The MiG-21MF lacks armor plating. It also has one engine unlike some other planes. This means that the survivability is very low, even among jets. Getting hit is something that should be avoided at all cost, because should the plane survive it, even small wing damage will force the pilot to return to base. The plane lacks radar warning receiver (RWR), which is a notable downside compared to the Soviet MiG 21 SMT.

Your main priority is to get to the R-60s as soon as possible, this will require you to unlock two tier III modifications. Unless you particularly want to research the ground attack ordinance you will be wanting to unlock "Wings repair" and "New 23 mm cannons" at tier III. Therefore you should research "Offensive 23 mm belts" as your first modification at tier I. This will then unlock tier II modifications where you can research "R-3S" and your choice of "New boosters" or "Airframe" (up to you in which order you unlock these), it may be appealing to unlock missiles first to help with the grind but you should keep in mind that the R-3S missiles are slightly worse than the AIM-9B and can only be fired when pulling less than 2G, which means they cannot be fired in even a gentle turn or climb. Once tier III modifications are accessible, you can unlock "Wings repair" and "New 23 mm cannons" in whichever order you want and then go for the R-60s. Once the R-60s are available you can unlock the remaining modifications in whatever order you see fit, however it is highly recommended to go for G-suit and engine upgrades first.

The MiG-21MF (Germany) is armed with:

The MiG-21MF (Germany) can be outfitted with the following ordnance:

The ▀MiG-21MF has access to ballistic computer for the guns and rockets.

While the ▀MiG-21MF itself is a pretty mediocre fighter, it has access to 4 deadly R-60 missiles. These missiles work the best when enemy is slow, so the recommended tactic is to wait a bit before engaging into the battle.

Due to the immense speed bleed in turns, it is strongly recommended to keep the speed high near enemies, unless one really wants to closely meet AIM-9J. Dropping below 800 km/h makes it really hard to dodge this missile. When an enemy is spotted, it is recommended to turn roughly into their direction, so when they engage, they'll have to make a 180° turn, which will give time for MiG pilot to disengage without risking getting hit by a missile.

Engaging in 1 v 1 situation can sometimes be done, but unless a faster opponent forces it (which happens rarely, as faster opponents turn worse than the MiG) it is only recommended if there are no other enemies nearby. However, do never turn-fight with Draken or Mirage. A good tactic for defensive dogfights is trying to make enemy overshoot, especially against Phantoms. Keep in mind however that you can outrun F-4C.

Final thing to note is that because the plane has no RWR nor radar-guided missiles, it is strongly recommended to stick close to the ground. This will make it unable for enemies to track you on their radar and send a radar-guided missile. This strategy comes with a risk of having to deal with enemies that are higher than you, but without RWR the pilot won't even know if there is a missile coming towards him.

The MiG-21MF is equipped with a RP-21 Sapfir search and tracking radar. The radar is mounted in the nose of the aircraft.

The MiG-21MF (Germany) is a second-generation variant of the popular MiG-21 'Fishbed'. Operated by the East German Air Force (Luftstreitkräfte der Nationalen Volksarmee; LSK) between 1972 and 1990, the aircraft was an export variant of the MiG-21SM, and is highly similar to its counterpart, the MiG-21SMT. Designated the 'Fishbed-J', the aircraft formed the bulk of the LSK in the late stages of the Cold War. All German MiG-21 aircraft were retired following the German Reunification, though some survive as museum aircraft to this day.[1][2]

The East German Air Force received many MiG-21 variants due to their ties with the Soviet Bloc. 76 MiG-21F-13 aircraft had been delivered to the East German Air Force in the early 1960s, and they later received 50 MiG-21PF 'Fishbed-D' planes, which were known as the MiG-21PFM in East German service.[1] This generated considerable confusion as the German MiG-21PFs had inadvertently been given the same name as the later, Soviet-made, MiG-21PFM 'Fishbed-F'.[1] However, in the early 1970s, the LSK received its first 3rd-generation MiG-21s, the MiG-21MF. This aircraft was essentially an export variant of the Soviet MiG-21SM. 50 MiG-21MFs were delivered to the LSK between 1972 and 1974.[1]

The MiG-21MF differs from the standard MiG-21SM by having a less powerful engine and simplified radar system, meaning that it accelerates slightly slower than its Soviet counterpart. It could reach a maximum speed of 2,230 km/h, and was flown by a single pilot.[2] As an interceptor, it carried a 23 mm dual-barreled cannon with 200 rounds in a ventral pack, and was also capable of fitting a variety of munitions including bombs, rockets and missiles.[1]

The MiG-21MF enjoyed a fairly uneventful service history with the LSK. The aircraft served with Jagdgeschwader (JG, fighter group) 8 and JG 9. It complemented the earlier MiG-21PFM and MiG-21F-13 aircraft in German service. Later on, it was complemented by the MiG-21bis, the final MiG-21 variant to serve with the German Air Force. At the time of the German reunification, many MiG-21s remained in German service.[1][2] As the new combined Luftwaffe had no plans to continue using the Soviet-era interceptor, all MiG-21 aircraft were retired in late 1990 following the German reunification. Many of those aircraft were reserved as museum pieces, and several survive to this day in museums across the globe.[2] 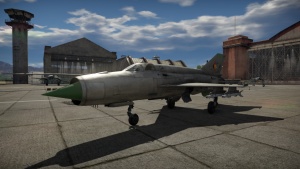