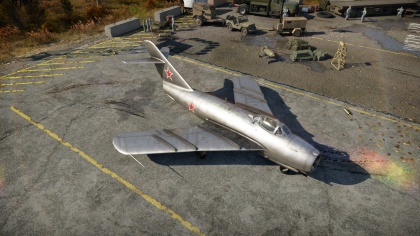 The newly gained top speed performance and manoeuvrability come at a hefty price. Turn rate and low speed flexibility is gone, due the stronger swept wing design and gained a quarter-tonnes.

As some positive characteristics traits of the MiG-15 vanish, some negative aspect vanish. The newly designed tail enables far better control close over Mach 0.8 (it still lacks a flying tail though) and the roll rate also significantly improved. Manual limitation set the airframe at positive 8G, with the increased control the likelihood of over stressing your airframe is easy and a steady hand required in evasive manoeuvres.

The Korean war showed that the MiG-15 and MiG-15bis fighters were able to battle any aerial opponent at least on equal terms. The MiG-17 was a further development of the MiG-15 design that had proven itself so well. It was decided to increase the aircraft’s speed by increasing the sweep of the wing and the fuselage being lengthened to maintain the centre of gravity. The MiG-15 and MiG-17 show almost no differences at first glance. The prototype of the MiG-17 was even called the MiG-15bis45. However, only the frontal parts of the fuselage are the same, from the air intake to the wing, if you don’t count the landing headlight that had been moved to the left wing and some minor details.