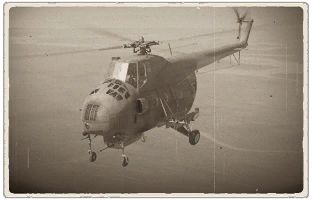 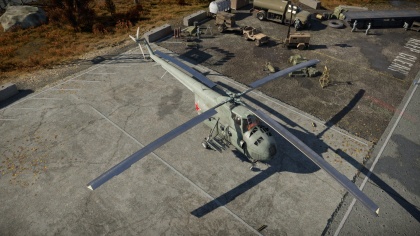 This helicopter is very slow; often times, you will most likely find yourself not being able to go over 200 kph. Additionally, the Mi-4AV has a poor roll rate.

The Mi-4AV is a large helicopter and a big target. Unfortunately, to help keep this bird in the air and hauling troops and weapons to the battlefront, sacrifices had to be made. Here, the sacrifice was armour protection. Armour would have weighted down the already heavy helicopter, but the lack of it did not deter the Soviet Union from building these helicopters and using them on a large scale as a showcase piece of their technological prowess. The Mi-4AV turned out to be a do-it-all helicopter despite not having any armour protection.

The pilot must be aware of their surroundings, as they do not want to bring undue notice upon themselves. Strategy plays key in this helicopters ability to sneak into position, let loose a volley of rockets or zero-in an anti-tank guided missile onto an unsuspecting target. Use structures and terrain to act as shields when possible.

It starts with one .50 cal as its only machine gun. This gun has a limited movement, meaning you may not be able to get it on target at times.

The Mi-4AV can outfit the following suspended ordnance:

The only suspended armament it comes stock with is 96x S5K dumb rockets. They can be replaced with ATGM's or bombs later with later upgrades.