Difference between revisions of "Mi-28N" 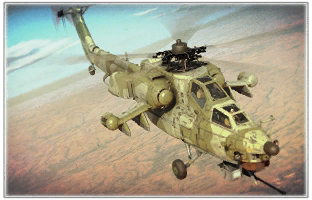 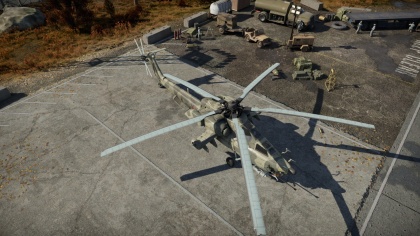 Following the introduction into service of the Mil Mi-24 Hind, design work began on an optimised attack helicopter with reduced secondary transport capacities, intended for a primary anti-armour and anti-helicopter role as well as providing aerial cover for helicopter landings. Following a number of proposed concepts, a preliminary design was chosen in 1977. Following the construction of a mock-up, a prototype was constructed and first flew on November 10th 1982, with a second prototype completed in 1983. Trials of the Mi-28 began in 1984, but the type lost out to the Kamov Ka-50. Despite this, lower priority development of the Mi-28 continued and production of the Mi-28 was approved in December of 1987. In January of 1988, the first prototype Mi-28A flew, fitted with more powerful engines and a different model of tail rotor; this prototype was first shown to the Western world at the 1989 Paris Air Show. In 1991 a second prototype of the Mi-28A flew, but with the end of the Cold War, the end of the Soviet Union and ensuing cuts in the Defence budget, the Mi-28A was re-evaluated and found inferior to the Ka-50, especially due to it lacking all-weather capabilities. As such, the Ka-50A was cancelled in 1993.

The Mi-28N was first presented in 1995 and first flew on November 14th 1996. Unlike the preceding Mi-28A, the Mi-28N was fitted with a whole array of vision aids, such as radar, a gun camera and forward-looking infrared (FLIR), giving it an all-weather capability. Once again, the post-Cold War realities in the Russian Federation meant that funds were not available and the program was given a low priority.

This changed in 2000 when attention was given to re-equipping the Russian Army. The Mi-28N was given a new priority, as a future replacement of the Mi-24. In 2004, a second prototype with an altered main rotor design was flown, and after trials, the first production Mi-28N was accepted by the Russian military on June 5th 2006, with the type being declared operational in October 2009. An export model, the Mi-28NE, has since been sold to both Iraq and Algeria. An updated model, the Mi-28NM, was first flown in 2016, with the first production examples delivered to the Russian military in June of 2019.