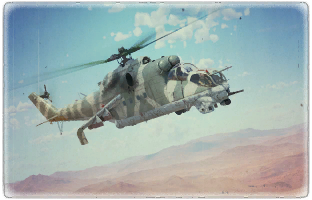 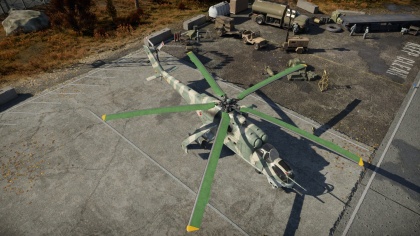 The Mi-24V in the garage

The Mi-24V is a rank VI Russian attack helicopter with a battle rating of 9.7 (AB/RB/SB). This helicopter was introduced in Update 1.81 "The Valkyries".

Work on the Mi-24 began in the early 1960s, with engineers at the Mil design bureau coming to the realisation that helicopters capable of both transporting troops and materiel as well as being able to provide fire support are gaining ever-increasing importance with new combat doctrines focusing on battlefield mobility. The Mi-24V is a further development of the Mi-24, that entered production in 1976. The V modification most notably introduced the 9M114 “Shturm” guided missiles to the Hind’s arsenal, which in turn significantly increased its hit probabilities and destructive power. In its decade-long production (1976 - 1984), around 1,000 Mi-24Vs were produced, eventually becoming the most produced version of the Hind.