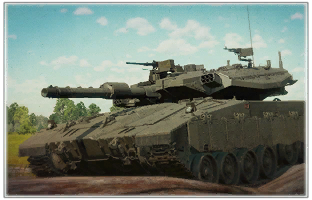 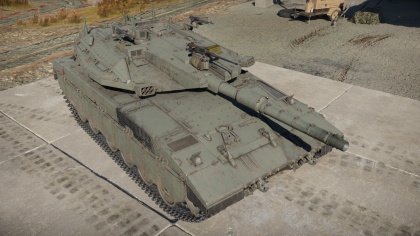 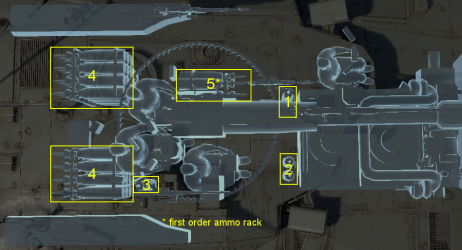 The Merkava Mk.3D offers an excellent cannon and great manoeuvrability, along with great frontal armour protection. The front of the tank is heavily armoured with angled armour plates, providing protection of over 300 mm. The only main weakness of this legendary tank is it's side and rear armour. On the sides, the NERA armour only covers the top half, above the composite screen plates. The composite screen plates can provide over 500 mm or protection. On the rear, the spaced armour only protects the crew compartments with 900 mm of air protection. Internally, the storage bins are covered in a fireproof container, with no ammunition stored in the turret. This reduces the risks of the ammunition being destroyed by a fire.

How to combat enemy tanks

Using the M325 HEATFS Round: is a High Explosive Anti Tank Fin Stabilised round, with a velocity of 1,078 meters per seconds, with a war head mass of 15.81 Kg. This round provides a maximum penetration of 480 mm at all ranges. To get the best from this round, you must aim for weakly armoured places on the enemy tank, generally the weakest places are the sides and rear of the enemy tank. At rank seven, most MBT's are heavily armoured with ERA plates which can defeat these types of rounds, with ease. However, it does not mean these rounds are usless, in-fact they are very good, instead of being able to single shot an enemy tank, it only requires an additional reload or two. The first shot, will most likely knock off and destroy the ERA plate. The second shot, will penetrate and knock the tank out.

Using the M339: HE-TF Round: is a High Explosive Timed Fused round, with a velocity of 900 meters per seconds, with a war head mass of 17 Kg. The maximum Penetration of the round is 65 mm, which is more than enough to penetrate the roofs of the enemy tanks, at rank seven. This round allows you to knockout targets which are hiding behind rocks, vehicles, houses and other objects. The round works by recording the distance to the target then denoting on them. To get the best out of this round fire above the target, allowing it to explode thus the enemy tank gets knocked out by being penetrated by the roof.

Using the M399: APFSDS Round: is one of the best rounds in the game it provides up to 625 mm of penetration. It is able to virtually penetrate almost any armour in the game at incredible lengths, at close range it is able to make the enemy tanker, go, pop.

The Merkava Mk.3D has four machine guns, one 12.7 mm mounted on the cannon, with an additional 7.62 mm machine gun mounted on each of the Commander's & Loader's cupola's and finally a coaxial 7.62 mm. The Merkava Mk.3D, is able to handle airborne threats extremally well, with it's LWS/LR system it alerts you to when someone is locking on with a laser range finder, which are installed in most if not all high ranking helicopters. When a notification pops up, switch to gunner sight and enable the thermal sight, look around in the sky and you will see brightly lit dot - if it flying away from you ignore it. If it is coming closer, keep an eye on it and wait until it is close enough for you to engage it.

However, if it has fired it's ATGM's pop smoke and retreat behind an object, until it's missile has blown up. Then locate it and fire the four machine guns, it will be able to bring it down. Or a using the M332 or M325 round a single hit in the fuselage will knock it out.

Capitalising on urban maps and environments: