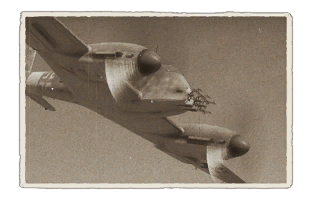 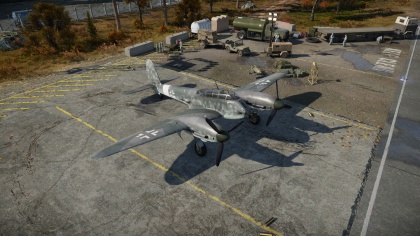 The Me 410 B-6/R3 is a rank IV German twin-engine fighter with a battle rating of 5.3 (AB/RB/SB). This aircraft has been in the game since the start of the Open Beta Test prior to Update 1.27.

The Me 410 B-6/R3, unlike its predecessors, has two 30 mm cannons in addition to the regular 20 mm cannons found on any Me 410. However, the 7.92 mm machine guns have been removed from the aircraft. With the 30 mm ammunition belts modification, the 30 mm cannons combined with HVAP-T belts make short work of light pillboxes, light and medium tanks, and even heavy tanks if hit on the side or back. Due to this, your primary goal should be unlocking the (Tier III) 30 mm ammunition belts.

The "Hornisse" is most well suited for bomber hunting due to its heavy armament. The aircraft can even use BnZ tactics against other aircraft, provided there is enough altitude. If you are planning to do aerial combat, be sure to side climb, as the 410's climb rate is far from superior to the Spitfires and Bearcats you will face. It is also equipped with airbrakes, which is quite unusual for an aircraft of its size and role. As with any plane, it is inadvisable to attack a bomber by sitting on its tail. It is advisable that you key-bind the 20 mm and 30 mm cannons separately if you are going for the CAS role it is well-suited for. Binding different buttons to fire the cannons separately can conserve a lot of ammo, as you can discriminate between which calibre to use when going after heavily-armoured or lightly-armoured targets. When choosing to go for the role of an interceptor, it is important (though you do not need too) that you cue the 30 mm and 20 mm together, as it will make much more of a difference in the 1-3 seconds worth of a good deflection.

"In addition to the main Me.410B modifications, a number of special-purpose variants of the Hornet were created for maritime operations. The anti-ship Me.410B-6/R3 modification was equipped with a FuG 200 Hohentwiel patrol radar system and a suspended WB 103 container with two 30 mm Rheinmetall-Borsig MK 103 cannons.

The Me.410B-5 maritime attack aircraft, with glide bombs (BT-Körper) as its main weapon, was to become the most significant Me.410 variation for sea operations. The bombs could only be suspended externally: two 400 kg BT 400s under the fuselage or up to six 200 kg BT 200s (two bombs under the fuselage and four under the wings). The aircraft was equipped with a FuG 200 radar and two 20 mm Mauser MG 151/20 cannons. The 13 mm Rheinmetall-Borsig MG 131 machine guns, both in the nose section and in the remote-controlled FDL 131 mobile mounts, were removed. The bomb bay was not used as a bomb bay and instead had an extra 650-litre fuel tank mounted inside. Instead of BT bombs, the Me.410B-5 could carry a 900 kg LT5b aerial torpedo, a 760 kg LT5i, or a 1,800 kg SC 1800 bomb. When a SC 1800 was included, the fuel tank was removed from the bomb bay.

Other types of anti-ship weapons were also tested on the Me.410B-5, such as the 800 kg SB 800RS bouncing bomb or the 1,000 kg SB 1000/400 bomb, with a decreased diameter designed to reduce drag. The bomb was stabilized by a braking parachute upon its being dropped.

In May 1943, the first Me.410s appeared in the front line in Tunisia. In June 1943, the Hornets took part in raids over Britain. Beginning in April 1944, they were used by the German Air Defence Force.

Although the Me.410 was superior to the Bf 110 in its performance characteristics, most of all in its speed and flight range, it was inferior as far as versatility was concerned. The Me.410's production was discontinued in September 1944. By this time, 1,160 machines were built in all versions, including bombers and scouts. It should be noted that some aircraft were redesigned Me.210s whose construction had not yet been completed."