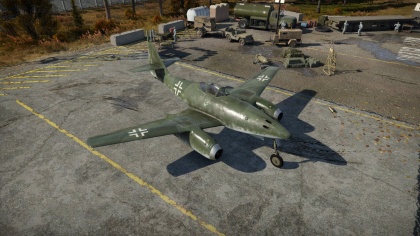 The Me 262C-2b Heimatschutzer II is a Rank V German jet fighter with a battle rating of 8.0. It was introduced in Update 1.41.

The 30 mm MK 108 autocannon has insane damage potential, with the third greatest in-game burst rate of 14.52 kg/s (32.01 lbs/s) and the great explosive warhead "minengeschoss" (=mine-shell) this weapon will vaporize aircraft, especially bombers. But every coin has a flip side and the "Sledgehammer" is no exception. The amazing rate of fire is bought with a very short barrel and small propellant charges, resulting in very bad ballistics: The slowest shells with the greatest bullet drop in game. The Mk 108 makes no compromise, only the extremes.