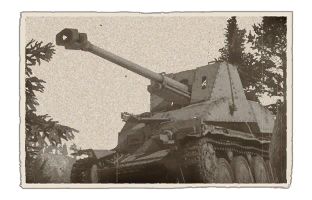 The Marder III is a rank Marder III German tank destroyer with a battle rating of 2.7 (AB/RB/SB). It was introduced in Update 1.43.

The armour of the Marder is its biggest fault. Because it is open-topped, strafing runs from fighter planes can disable the crew very easily, even leading to ammo detonation! Enemy tanks only have this privilege because of poor positioning of the Marder, or because of a highly exploited breakthrough of allied defences. The front turret armour is also very thin and is vulnerable to basically any weapon save most 7.62 MGs. The hull armour at the front is rather thick at 50mm and is decently sloped for a tank destroyer. It still should not be relied on heavily, but if angled correctly it can be used to deflect British 2 pdr. guns, German, US and Russian 37mm and sometimes 50mm guns, as well as most ammunition used by the KV-1 series of tanks.

The Marder also has surprisingly poor manoeuvrability for a small tank destroyer. Being based on the Pz38(t) chassis, forward turning abilities slow the tank down significantly and neutral turning leaves a lot to be desired. The fact that the Marder has a forward facing gun with no turret means that it is required for the whole vehicle to turn to align the gun onto target if out of its arc of fire. Therefore, it is highly recommended to play with a squadmate or more mobile player, as the mobility of the Marder can significantly hamper urban combat abilities. Use the high speed of the Marder to reach a comfortable shooting position and stay there- the poor traverse and turning speed is fatal against nearly all turreted vehicles, along with the very poor armour.

However, the Marder makes up for most of these drawbacks with its high velocity, high damage 76mm cannon. It can OHK every single tank within the 1.7-3.7 BR range. Whether it be a Sherman, T-34, or Churchill, no UFP (upper front plate) is safe. Ballistics are very similar to all other 75mm long guns in the German line (IV F2, Marder III H, etc.), and thus experienced German tankers should not have issues assimilating to the Marder's cannon. 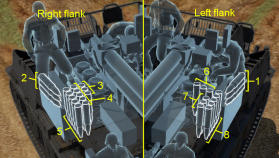 An antitank vehicle designed on the basis of the Pz.38(t) tank by the BMM company (formerly ChKD) by installing a 76.2mm F-22 division cannon on the chassis of a captured Soviet tank that had been modified by German engineers. The impetus for building this platform was the fact that in 1941 it became clear on the Eastern Front that the Wehrmacht did not have the means to fight Soviet heavy tanks. At the time, the captured 76.2mm F-22 division cannon was able to fight these tanks, so they decided to install it on the reliable frame of the Pz.38(t). BMM produced 344 of these antitank vehicles.

Skins and camouflages for the Marder III from live.warthunder.com. Watch out for the "Marder III H" entries as they will not fit on this first version. You need the ones with the small, not rounded turret.