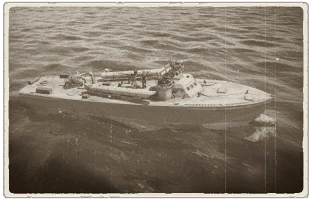 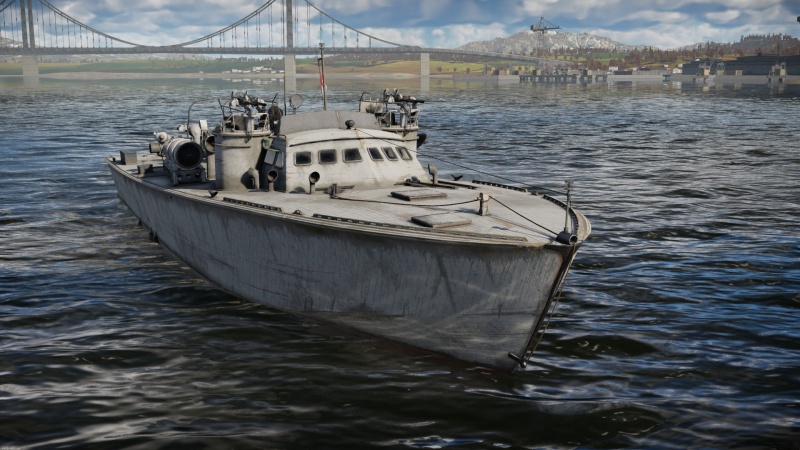 The Higgins 78ft MTB-422 is a premium gift rank III British motor torpedo boat with a battle rating of 2.3 (AB/RB/SB). It was introduced during Update "Winged Lions" as a reward for Battle Pass: Season VI, "Firepower".

The MTB-422 lacks any dedicated armour on the entire vessel. This results in exposed modules, such as turrets, being knocked out easily. The ammunition is also all stored above the waterline, meaning ammunition detonations are relatively common. This can be mitigated slightly by angling the vessel.

The MTB-422 is quite quick to accelerate thanks to its three 4,500 shp Packard W-14 M2500 gasoline engines powering three shafts. The top speed of the vessel is 74 km/h which is competitive for its BR and allows it to quickly reach cap zones. The manoeuvrability of the MTB-422 is provided by a pair of rudders, which allow for tight turns in littoral environments.

Overall, MTB-422 excels in environments with cover, in which it can fully utilize its ability to speedily flank and attack the enemy from the side or behind.

Being a premium vehicle, the MTB-422 comes with all modifications unlocked.

The main armament of the MTB-422 is a single 40 mm Bofors L/60 Mark 3 cannon mounted near the stern of the vessel. This cannon allows the vessel to punch above its weight class, as it is capable of putting down heavy Russian gunboats such as the Pr.1204 late or even the MBK-161 late. The 40 mm has a choice of three different belts available to it.

It is recommended to mostly bring HE belts, as most opponents will not have the armour to require the use of AP. However, captains should still bring at least some AP belts, as armoured gunboats tend to resist the 40 mm HE quite effectively.

It should be noted however that since the gun is on the stern of the vessel, the entire boat must turn to get the gun on target.

It is recommended to use the HE belts as they have the most post-penetration damage potential.

The MTB-422 is equipped with two Mk.VIII torpedoes on either side of the bridge and angled slightly to the left and right respectively. These torpedoes have a warhead with 327 kg of TNT, which is middling for most torpedoes. They travel at 84 km/h with a 4.57 km range without the torpedo mode modification installed, and 76 km/h with a 6.4 km range with the modification installed.

Overall, these torpedoes can easily one shot destroyers and seriously damage cruisers. It recommended to not use the torpedo mode modification as most engagements will be within the 4.57 km range and the added speed reduces the opponent's chance to evade.

Overall, the MTB-422 can be used as a hit-and-run style of gunboat. The mobility and manoeuvrability allow it to reach a capture point, capture, and then escape to set an ambush for boats trying to recapture the point. In an uptier, it is recommended to try to sneak around the map to capture points and perform torpedo runs on unaware destroyers. In a downtier, the boat may be played much more aggressively, as the 40 mm cannon will shred low-tier coastal vessels with just a few shots. It should also be mentioned that it makes an excellent addition to a high tier naval lineup as it is a great coastal vessel to capture points in before spawning in larger capital ships.

The PT-92 torpedo boat was built in the USA at the end of 1942 at the Higgins Industries shipyard in New Orleans, LA, amongst the bulk of the sister 78-foot boats she was intended for Lend-Lease delivery to the Soviet Union. Due to the cancellation of the spring convoy in 1943, the boat went on to serve in the Royal Navy, where she received the hull number MTB-422. Here the boat was used in combat operations in the Mediterranean until the end of World War II. After the war, the boat returned to the United States, where she served at least until the mid-1950's; the further fate of the boat is unknown. The boat was finally decommissioned from service late in 1985.