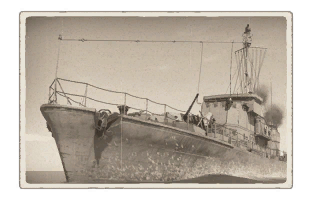 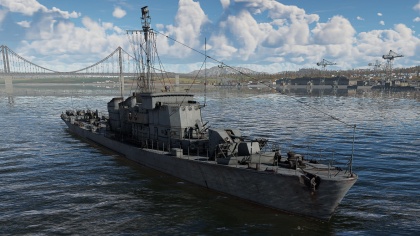 The MPK-163 is a rank I Soviet sub-chaser with a battle rating of 2.3 (AB/RB/SB). It was introduced during Update 1.79 "Project X" when the Soviet fleet was implemented into the game.

Straight line speed is excellent, when spaded this vessel is capable of reaching 71km/h in arcade, easily capable of outrunning stock S-boats. For its size, the boat is extremely fast and somewhat manouverable, however like its predecessor, the length of the boat makes it difficult to navigate in shallow waters or tight corridors, and stopping distance is also an issue.

The secondary gun is a 37 mm 70-k gun with a high rate of fire for its calibre and is most effective as an AA gun, and should be left as one, unless pesky patrol boats manage to surpass your large primary, then switch to this gun to take care of them quickly, as this gun has an exquisite firing arc on your boat and a good turn rate. It really isn't effective against other sub chasers of your size