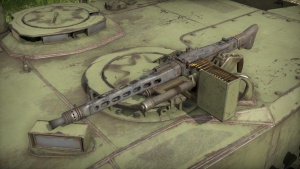 The MG 3A1 is a German 7.62 mm General-Purpose Machine Gun (GPMG). The MG 3A1 is a post-war derivative of the MG 42 (7.92 mm) machine gun, re-chambered to take the 7.62×51 mm NATO round, and featuring other improvements. The weapon is primarily found as the co-axial or commander's machine gun on post-war German Tanks. Being only a 7.62mm machine gun it is largely ineffective against all but the most weakly armoured, or open cabin, vehicles.

Being a derivative of the MG 42 the MG 3A1 performs almost identically to it.

The MG 3A1 can only be equipped with one ammo belt consisting of one Armour Piercing (AP) bullet, followed by one Tracer bullet. Neither bullet has much penetration (maximum of 10 mm), however the AP bullet performs much better than the tracer bullet.

The MG 3A1 performs almost identically to the MG 42, but has a significantly higher belt capacity at 1,000 rounds instead of 150. Like the MG 42 the MG 3A1 has an extremely fast rate of fire compared to other machine guns at 1,200 rounds per minute.

Due to the very low penetration this weapon it is largely ineffective against enemy armour (although you may be able to penetrate some vehicles with extremely thin armour). The gun is primarily useful for incapacitating exposed crew members in open topped vehicles (although there are few such vehicles at the battle ratings this gun is found at). The gun can also be used for ranging on some vehicles, as well as marking enemy vehicles and obscuring the view of enemy players (shooting at their gun sight). You can use the gun against aircraft however it does minimal damage, and being co-axially mounted on most tanks can often not be brought / kept on target against aircraft. Clearing trees and bushes is another use.

The MG 3A1 is a German General-Purpose Machine Gun (GPMG) chambering the 7.62×51 mm NATO round, the weapon is derived from the war-time MG 42 and bears close resemblance to its predecessor. After WW2 Germany was looking for a new machine gun to equip the Bundeswehr (the German Army) and Rheinmetall was contracted to produce a new version of the highly successful MG42, from the Second World War. The original design plans for the MG42 were captured by the Soviets in the aftermath of WW2, and so Rheinmetall had to reverse engineer existing MG42s in order to re-create the design.

The new Weapon entered service in 1958 as the MG 1, a reverse engineered MG42, re-chambered for the NATO standard 7.62×51 mm, and with other minor differences. While MG1s were being produced existing stocks of MG42s were re-chambered from the 7.92 × 57 mm Mauser round to NATO ammunition and designated MG 2. Throughout it's service the MG1 was upgraded with MG 1A1, A2, and A3 variants being produced. In 1968 the MG 3 entered service as an improved version of the MG 1A3. The MG 3A1 is a variant of the MG 3 modified for use on armoured vehicles. The MG 3 family of weapons is still in service with the Bundeswehr and several other armed forces to this day.