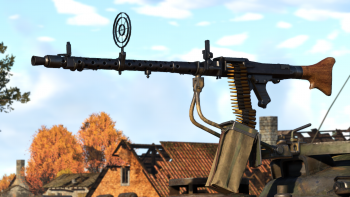 The 7.92 mm MG34 is a recoil-operated, air-cooled machine gun of German origin.[1] Development of the MG34 began in 1934 by Heinrich Vollmer, eventually seeing service with the Francoist Spanish forces in the Spanish Civil War. Inspired heavily by Rheinmetall's MG 30, changes and developments made to the MG34 design led it to become the first General-Purpose Machine Gun (GPMG).[1] The weapon was revolutionary for its time, boasting the highest fire rate of any machine gun at the time,[2] though its technological superiority came at a cost, causing it to be far too expensive and complicated to mass-produce on its own. Thus, it was produced and implemented in tandem with similar machine guns such as the MG42.[3] 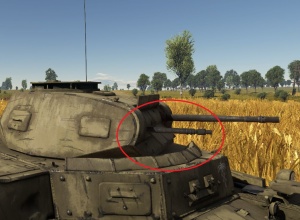 The MG34 is a common sight in War Thunder, being mounted coaxially in many German tank turrets and even on some external Anti-Air and Anti-Infantry mounts. It was found to be better suited to such applications than its counterparts, and quickly became the Wehrmacht's weapon of choice for supplying armour with rifle-calibre protection. It was also used as light-AA on certain Kriegsmarine vessels. 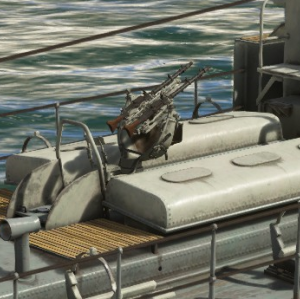 In War Thunder, the MG34 is a secondary weapon and thus does not have optional belts. It uses one default belt, consisting of AP/AP/AP-T for tank battles, and straight AP-I for naval.

While having a slower fire rate than the MG42, both weapons fire the same ammunition at the same velocity, meaning they perform nearly identically. The frequency with which the MG 34 appears means players of the German ground forces will be well-acquainted with the 7.92 mm calibre which sets the standard for MGs in the German tech tree. 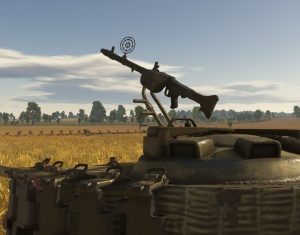 An example of a pintle-mounted MG34 with AA sight on a Tiger I.

Being coaxially mounted is a significant advantage for taking out light vehicles such as SPAA or tank destroyers with an exposed crew. On rare occasion, certain fully-enclosed vehicles have so little armour that they can be penetrated by the MG34 at close range. If you are lucky enough to be driving a vehicle with a roof-mounted MG34 such as the Jagdpanzer 38(t), it performs well as a deterrent for attacking aircraft, and might even score you a kill. And as with any other machine gun, it can prove to be a useful tool for spotting enemies for your allies or clearing obstacles.

The MG 34 is the world's first general-purpose machine gun. The requirement came from the Riechswehr (Realm Defense) for a new machine gun that would replace their aging collection of World War I era water-cooled machine guns and fill the role of a magazine-fed light machine gun, belt-fed heavy machine gun, vehicle-mounted machine gun, anti-aircraft machine gun, and pillbox machine gun using a single design to cover each role. Unusually for a gun of this era, the development was led by the Waffenamt (Germany Army Weapons Agency) instead of an individual company. The end result was the MG 34 which began production in 1936 but wasn't formally known to the world as a German design until 1939 by which point the Wehrmacht (German Armed Forces) had 50,000 guns in service[4].

Due to the requirement of using the MG34 in a number of roles, the guns were given an adjustable rate of fire between 400-900 rounds per minute depending on the application. As a light machine gun, it was fed with a 50-round trommel magazine and fitted with a bipod. The ten-man Gruppe (squad) would have three men to operate the MG 34 in this configuration, a gunner, an assistant gunner, and an ammunition handler. As a heavy machine, it was mounted on a pintle-mounted tripod and belt feed. In this configuration, the optimum crew was 6 from a Zug (platoon), with a gunner, assistant gunner, squad leader, and three riflemen to carry extra ammunition and other needed equipment. The anti-aircraft role could be implemented by simply attacking an aircraft sight to the tripod assembly. The Kriegsmarine (War Navy) used the MG34 as their standard machine gun on their warships even using them in twin mounts used by its airborne counterpart the MG 81 in the armored S-38-class boats.

The MG-34 was an effective infantry weapon, but it was expensive. It used a large number of milled parts making it time-consuming to produce and the materials needed to make them required trace metals Germany didn't have[4]. Germany, like the other nations of World War II, would move on to developing small arms that used simpler stamped steel parts that were quicker to produce. The process of converting the MG 34 design to a stamped steel weapon led to the infamous MG42. Despite this new weapon, the MG 34 remained in production and service during World War II and never completely replaced the MG 34 in all infantry units and the design of the MG 42 left it unable to fill a significant niche.

The niche was the role of a tank machine gun. The MG 34's quick-change barrel operated by having the entire receiver pivot to allow the barrel to drop out of the weapon [4]. The MG 42's side-releasing quick-change barrel system left it unable to operate in a coaxial mount. As a result, the MG 34 would remain the primary coaxial weapon for armored fighting vehicles in World War II serving in all vehicles except for the Jagdpanzer IV which could fit the MG 42. The MG 34 in tanks featured an armored barrel shroud and the butt stock removed.

After World War II a significant number of MG 34s were captured by the Soviet Union and Britain who contributed these to the Communists and Nationalists respectively during the Chinese Civil War. From the Chinese, these weapons would end up in the hands of the Viet Cong (Communist Viet) and PAVN (Quân đội nhân dân Việt Nam) during the Vietnam War. France would also capture multiple MG 34s which found use in post-war colonial conflicts and Czechoslovakia would continue production of the design after the war. The MG 34 even saw use in the 21st century in the Syrian Civil War.[5]