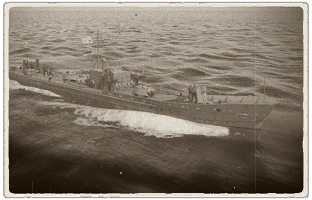 The MBK-161 (1944 series) is a rank IV Soviet armoured gun boat with a battle rating of 3.7 (AB/RB/SB). It was introduced during Update 1.79 "Project X" when the Soviet fleet was implemented into the game.

The MBK-161 (1944) class were the second and last 10 ships built of the MBK-161 class of riverine gunboats. Completed during 1944, they were large and heavily-armoured gunboats designed for use in littoral environments. Members of this class were intended to carry two 82 mm mortars, but were instead armed with two 45 mm cannons in lieu of th The members of the MBK-161 class saw extensive service in the Baltic during the Second World War in fire support roles, and were eventually retired in the early 1950s.

The MBK-161 was designed with heavy protection in mind - the citadel, turrets and conning tower had armour of varying thicknesses from 52 to 60 mm. The bow and stern were also armoured with plating. However, this armour was detrimental to handling - despite the fitting of two 1200-hp lend-lease Packard engines, the ship was only capable of making 13 knots (24 km/h). The armament consisted of two 76 mm F-34 guns, the same weapons as the mighty T-34 medium tank. Secondary armament consisted of a single 37 mm 70-K dual-purpose gun and three 12.7 mm DShK machine guns. The ships were intended to carry two 82 mm mortars, but this plan was changed - the 1943 MBK-161s were fitted with a 45 mm cannon in lieu of one of the mortars, while 1944 MBK-161s had both mortars removed and replaced with 45 mm cannon. As well, the 1944 MBK-161s had a much taller cutter-bow installed to improve handling in rougher seas.

In total, 20 MBK-161 boats were built, including 10 in 1943 and 10 in 1944. The 1943 members of the MBK-161 class entered service in late 1943 and served mainly in the Baltic region. They were involved in many surface actions, including the Battle of Nerva Island where Soviet small naval forces engaged two German Type 1939 torpedo boats - during this engagement, the MBK-161 boats “BK-503” and “BK-505” were damaged. Following the end of war, the MBK-161 class remained in Soviet inventories until their eventual disposal between 1949 and 1956.