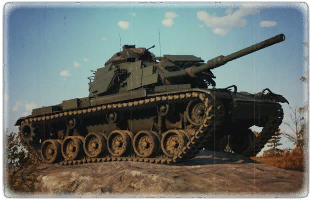 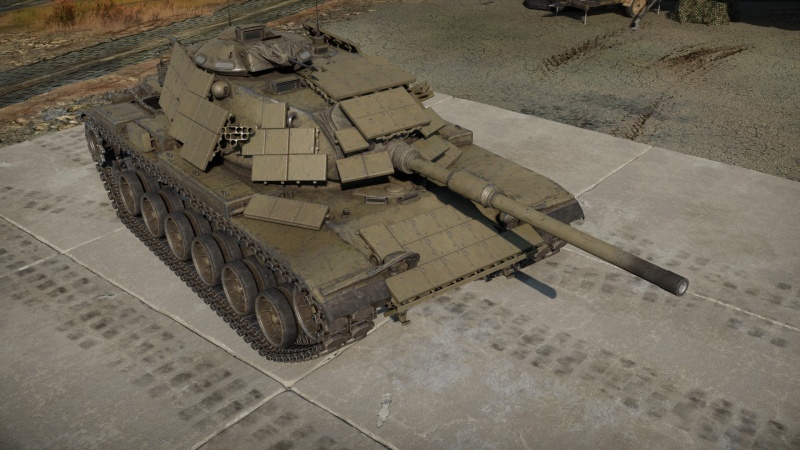 The survivability of the M60A1 RISE (P) is not to be relied upon whatsoever. APFSDS will go through the armour with ease, and high-penetration ATGMs will as well. The only area that is likely to prevent penetration from APFSDS rounds in the mantlet, which is hit or miss. The ERA is only capable of stopping HEAT or HESH shells from penetrating the armour. On the other hand, the HEAT shells may be able to slip between ERA plates to penetrate the armour. Not only that, but the ERA is knocked off after one hit from APFSDS or HEAT, and from multiple hits from machine guns. Once the ERA is knocked off, chemical weapons will punch through the armour with ease.

Due to the ammunition layout of the tank (storage in the turret and hull), there is a high chance of ammunition explosion after a penetration. Additionally, when the turret is facing forwards three crew are lined up, making for an easy one-shot. One thing to note, the M19 commander's cupola on top of the turret is significantly higher than the rest of the turret. When peaking over a hill or cover, the cupola is a viable target for APHE, HE, or HESH rounds, which will splash down through the turret roof to knock out other crew members. Even kinetic rounds such as APFSDS will incapacitate the commander, although they won't do any other damage.

The M60A1 RISE has very special play style, which is affected by the lack of speed. While most tanks at this BR are fast, the M60A1 RISE isn't. That is why you should stay between the first and the second front lines, and clean up enemy tanks that try to rush behind your lines. The M60A1 RISE is best played when holding choke points with your great long range gun, and punishing fast tanks like the Leopard A1A1 that try to rush through. With great penetration for all of your shells, no tank should be a serious problem when you shoot at it, and even if you miss a shot, the M60A1 RISE can cover it with good gun reload. Remember, you are not a rusher, advance with your team, cover them when enemy tanks try to get their flanks, and hold angles at important locations.

While the playstyle isn't very versatile, the wide ammo selection can help when a specific ammo type can be helpful. With HESH, HEAT-FS and smoke shells, you can engage any target at any situation, but your main shell is going to be the M735 APFSDS shell, and it should be researched as soon as possible. until you unlock it, you can use the HEAT-FS, or the APDS shell which is available as stock.

In conclusion, the speed limitation of the M60A1 RISE forces it to play as a second line fighter, use your combat awareness to punish enemy flankers and cover important locations and choke points.

Variants Leading up to the M60A1 RISE

In 1960, work was started to upgrade the M60 main battle tank, as the T95 project and the project to create composite armour were closed. The prototypes fitted the T95E7 turret on the hull of the M60. In order to increase the room in the turret for the crew the gun used the M140 mount, which moved the gun forward 5 inches. The first two prototypes (Pilot 1 and 2) were ready in May 1961, and the third prototype (Pilot 3) was ready in June 1961. The prototypes were designated as the M60E1, and they were all built by Chrysler Defense. Pilot 1 was tested at Eglin Air Force Base, Pilot 2 was tested at Yuma Test Station, and Pilot 3 was tested at Fort Knox. The M60E1 was accepted for American service on 22 October 1962. The designation for production M60E1 tanks was Tank, Combat, Full Tracked: 105-mm Gun, M60A1. Production began on 13 October 1962, with an order of 720 units by the Army.

The M60A1 RISE integrated the upgrades of the M60A1 (AOS)+ and TLAC, along with new features, and it first debuted in 1975. It featured the improved AVDS-1790-2C RISE diesel engine and CD-850-6 transmission. These parts were more reliable than the earlier types used. A 650 ampere oil-cooled alternator, a solid state regulator and new wiring harness with more accessible disconnectors was also incorporated into the hull's electrical system. Additionally, steel road wheels and and return rollers were used, and new, armoured TLAC panels replaced the unarmoured panels. It featured an M32E1 passive sight for the gunner, an M36E1 passive periscope for the commander, and an M24E1 IR night vision block for the driver. The new optical equipment allowed for recognition at longer range and at lower light levels for the commander and gunner. In conditions with only starlight, the optics allowed for vision past 500 meters with the use of an IR searchlight. The driver's M24E1 IR night vision block gave the driver second generation night vision capability.

The Passive upgrade for the M60A1 RISE incorporated all the features of the M60A1 RISE+, but with a number of improvements. It was equipped with Kevlar spall liners in the turret, AN/VVS-2 passive night vision block, a deep water fording kit, and brackets for the mounting of ERA armour. It received the improved AVDS-1790-2D RISE engine and CD-850-6A transmission; it was capable of using a vehicle engine exhaust smoke system. The VEESS smoke screen does not protect against infrared, thermal, or laser detection methods, but only obscures the tank visually. In 1978, a kit entered service that installed an M240C machine gun in the coaxial position, and it equipped the tank with two six-barreled M239 smoke grenade launchers (electronically fired), with one mounted on each side of the turret front. The smoke grenades masks the tank both visually and the thermal signature using a phosphor compound.