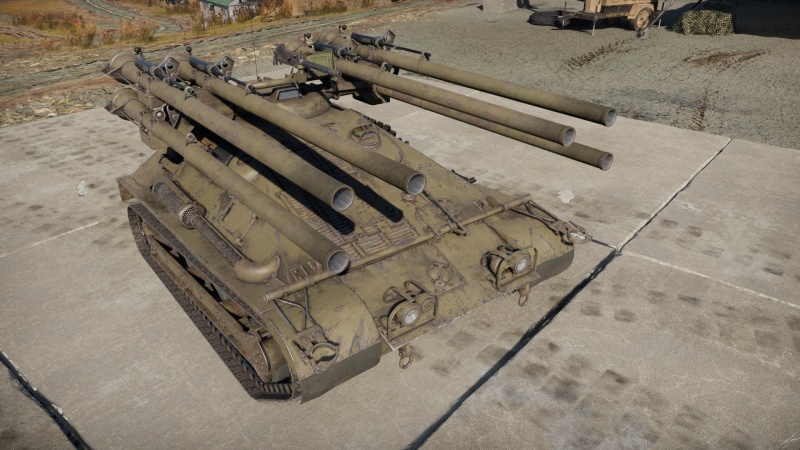 The M50 "Ontos" is pretty much a bulky carrier of recoilless rifles, carrying a payload of six shells of devastating HEAT and HESH shells. With six launchers pointing forwards, a well-emplaced M50 can point itself downrange and once a target comes into its sights, unleash all shells until the target is annihilated.

A stealthy and pouncing game style is needed to make the most of the hard-hitting guns and the thin armour of the Ontos.

The turret displacement is limited without being a huge handicap as it allows to cover a wide area without (±40°) having to reposition the hull. And in the case your guns reach a stop, repositioning the hull is quickly done.

The targeting process is manual and in average twice slower than tanks with turrets at the same tier or battle rating. However, the recoilless nature of the guns eliminates the need for retargeting between shots as the recoil is minimal. The short delay between shots eliminates the need for repositioning as it does not leave the target any time to retaliate.

An aspect to consider is the offset of the guns from the central target sight: at close range its impact is minimal but becomes noticeable when firing at specific weak spots on targets at a distance. Using the scouting MGs can help you assess the off-set but will reveal your position. Given the rifles layout of the Ontos, it is recommended to fire by salvos of 3 shells to guarantee a good balance between rate of fire and accuracy.

Like for a SPAA belt, you have to fire all 6 rifles before being allowed to start the reloading process. Your ammo capacity of 18 shells total (or 3 belts of 6) is limited, which will impact your combat performance as you're very likely to have to disengage in order to restock during a battle.

Ammo racks of the M50

Six shells are loaded per reload. Individual tube reload is not possible.

M50 Ontos at the National Museum of the Marine Corps

Obviously the M50 is not a main battle tank, with its thin armour even Reserve units are a threat! Stealth and guile is the tactic, using its high mobility and small size to get in ambush or outflank an enemy push fast. Memorize shooting spots, be it concealed ambush points or sheltered ranged locations overlooking active routes. The most important tactic is learn how to operate it! Keymap a separate trigger for the spotting gun and learn the firing sequence! Nothing worse than sight a perfect target, but the gun on the wrong side is fired into a rock! Also keep in mind the turret has only 80 degrees of traverse (+/- 40), a consideration during tactical manoeuvres. Still, compared to other ATG's this traverse is much wider, and also has a respectable -10 depression. Add that -10 degrees and angled position to the already extremely sloped front glacis armour and one could be bouncing large calibre AP rounds! Don't forgot to spot enemies too, make them feel the pressure, not you.

It was such a strange "tank" the only word the US Army could think of for this strange thing was, well, "Thing", except someone was clever and used the Greek word, ὄντος (really, truly [exists]). Due to mountainous and difficult terrain of Korea brought the US Army revisited the idea of a light tank. It was quite an ingenious design made very quickly. The prototype was based on an M56 Scorpion ATG chassis, used a common truck engine, and mounted six very powerful M40A1C recoilless rifle guns and be light enough for air transport. The prototype was finished in 1952 and by 1955 completed its testing where it fulfilled its design requirements, but the Army simply did not like this monstrosity and decided against it. The US Marines on the other hand was not as picky and loved this highly mobile light tank with a huge punch, so ordered 297 in 1955. The design was reworked with a new chassis, new running gear with wide thread (ditching the M56 design), better internal layout, and other minor improvements that made the Ontos a unique one off design. While it had a few flaws, it was reliable enough to accomplish its mission.

The key to the M50's offensive power is the 106mm M40A1C recoilless rifle firing devastating HEAT or HESH (later an anti-infantry "beehive") rounds with its integrated M8C .50 cal spotting rifle using a 10 or 20 round magazine. It should be noted the M8C is a shorter round (12.7x77mm, M48A2 Spotter-Tracer (S) bullets only) that the better known .50 AN/M2 BMG (12.7x99mm). Every M40 produced had the M8C, but on the M50 the lowest 2 barrels have this spotting rifle removed leaving an empty mounting post. If wanted (but not recommended) all 6 guns can be fired at once delivering far more destructive offensive load than any tank then or today. The nature of recoilless rifles is a powerful blow back, during a test firing all 6 simultaneously it knocked bricks out of a building and shattered a few car windows. In between is mounted a single pintel mounted .30 calibre M1919A4 machine gun for anti-infantry use.

The first combat use of the Ontos occurred in 1964 Dominican Republic Civil War where it reported destroyed an AMX-13 and an old Swedish L-60 (the only time it was used for purpose built, destroying tanks). But it was the following year when it was deployed to Vietnam did it shine.

Vietnam was extremely hostile to tanks not due to enemies but the environment. Jungle, swamp, rice fields, mountains, rivers, a limited road network with small bridges; it was a nightmare for regular tanks but the Ontos could glide over them with ease. Enemy Vietnamese troops rarely used tanks and few anti-tank guns so there was little threat from them, the paper thin armour was more than enough to resist small arms and heavy MG fire most often encountered. The significant vulnerability of reloading the 6 guns was largely moot as the fearsome reputation of this 6 shooter beast often cleared out enemy positions soon after it started shooting. Unfortunately its age was its greatest enemy. Over 10 years old and long out of production breakdowns became more frequent, some were cannibalized for parts and the turrets where mounted to fixed positions as point defence. Despite its unprecedented success in Vietnam its limited numbers, scattered deployment, breakdowns, and frequent rotation, it did not gain as much fame as it could have. More of footnote today, this unusual tank was the perfect vehicle for very difficult conflict.