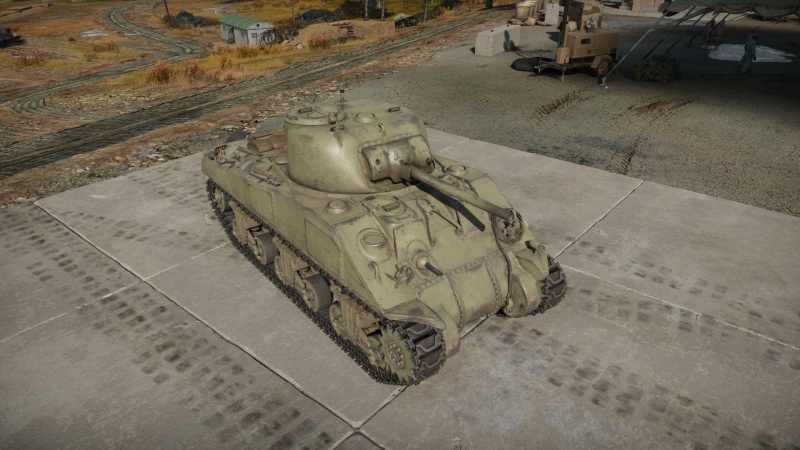 The American-made M4A4 tank is similar construction to the M4 seen in the American tech tree, but fitted with an A57 Chrysler multi-bank engine. The larger engine design required a longer hull to hold it, resulting in the M4A4's elongated profile, as well as the wider spacings in between the suspension bogies. Otherwise, the utility of the M4A4 in the Chinese tech tree is no different than any other 75 mm armed M4 Sherman tanks.

Based on the chassis of the M4, the M4A4 (China) has the same good all-round mobility: the tank accelerates quickly and is able to reach a maximum speed of 44 km/h in a dozen of seconds. The brakes are powerful and will make the M4A4 skid rather than slow down when driving at maximum speed. The violent braking also causes the hull to wobble, making your targeting less accurate. The reverse speed is rather poor: it won't get you out of a dangerous situation quickly enough. The lack of neutral steering makes turning on the spot slow (2 km/h): make sure to build a little speed before turning and you'll turn much faster (11 km/h). Turning in reverse is equally slow (-2 km/h) Turning at full speed doesn't make you lose much speed as your acceleration is good. The offroad mobility is good: the M4A4 (China) reaches 16 km/h when fording, 17 km/h when driving uphill with some speed built-up but a mere 10 km/h uphill from a stop start. The tracks are large and grant you a decent mobility on hard (solid ground, roads) and soft terrain (mud, snow, sand). Light and medium obstacles (fences, posts, bushes and small trees) are not a problem but large obstacles will reduce your mobility: avoid them.