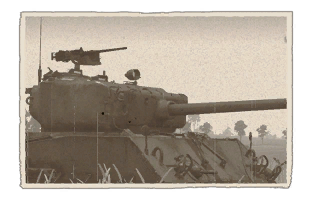 The Medium Tank M4A3 (76) W HVSS Sherman (also known as the M4A3E8) is a Rank IV American medium tank with a battle rating of 5.7 (AB/RB/SB). It was one of the first American tanks to be released with the American ground tree in Update 1.45 "Steel Generals". This tank gives the M4 Sherman the best upgrades possible, with a new suspension and a high-penetrating 76 mm cannon with access to APCR rounds.

Playing as the M4A3 can be tricky since it features armour that can't stop most calibers at its rank such as the German 8.8 cm or the Soviet 85 mm, including the fact that it isn't the fastest tank. The M4A3 plays more of a support role, use its' powerful 76 mm as you assist your teammates during an advance or defense. The number one rule of this tank is to never fight alone with it, always be with a teammate and use cover when available since it will give you a great advantage.

As a newly developed Sherman late in the war, the M4A3E8 did not see much use in the European theater until near the end of the war. Earlier deployment of such tanks did not take priority as military commanders did not take the 76 mm gun with much enthusiasm as the 75 mm gun could fire a much better high-explosive round to fight softer targets, which consists of more than half of the engagements the Shermans typically face. Another reason why these tanks did not see service earlier was the lack of battle need. The 75 mm gun was doing its job well and there were already a few 76 mm Shermans going around fine with the older VVSS. These opinions changed with the Battle of the Bulge, where the German offensive with large numbers of their heavy tanks such as the Panthers and Tiger II's decimated armoured units stationed in the Ardennes. The M4A3E8 saw its first service in the Battle of the Bulge in low numbers, but their prevalence increased after December 1944 when the Battle of the Bulge urged many military commanders, even Eisenhower, to request further deliveries of Shermans to only be armed with the 76 mm cannons. The new units deploying in Europe afterwards had exclusively 76 mm Shermans and as standardization in the suspension went on, the HVSS became more and more common in the European theater.

While the Shermans were finally replaced in American service, many other countries that received the Shermans still used them all the way to the turn of the century. The most famous is Israel, who received a large handful of Shermans from the British to fight for its war of independence in 1948. When the Soviet started aiding the Middle East countries with tanks like the T-34-85, PT-76, and even the T-54s, Israel launched a program with cooperation with France to upgrade the Shermans. The result was the implementation of the AMX-13's 75 mm gun, based off the Panther's gun, onto the Sherman turret. Another program in the 1960s attached the larger 105 mm Modèle F1 French gun from their AMX-30 into the Sherman. The upgraded 75 mm and 105 mm Shermans were designated the M-50 and M-51 respectively, both more well known as the "Super Sherman" abroad. These tanks served in the Middle East conflicts that Israel had to deal with such as the 1956 Suez Crisis, 1967 Six-Day War, and the 1973 Yom Kippur War, where the "Super Shermans" proved itself as adequate against the superior and more modern Soviet tanks. These Shermans serve as a symbol of how desperate Israel's situation is with their neighbors, and also an example of how the Sherman is a proven design able to keep up with the arms race with adequate upgrades in its armaments.

Skins and camouflages for the M4A3 series from live.warthunder.com.