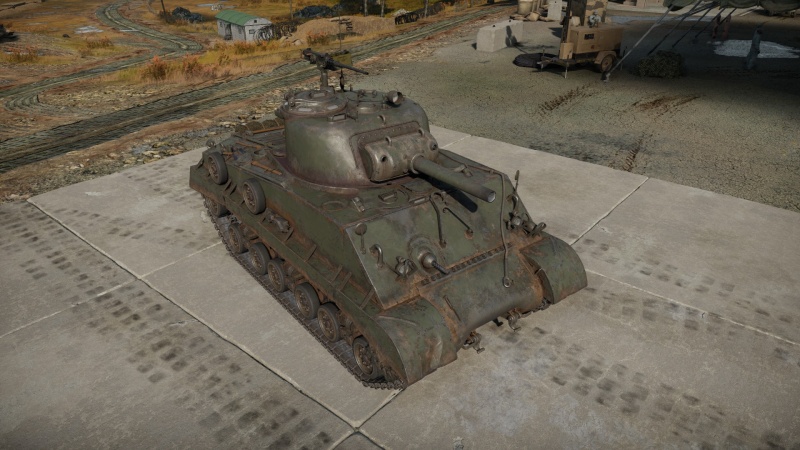 The ▄Medium Tank M4A3 (105) HVSS Sherman is a rank II French medium tank with a battle rating of 3.0 (AB/SB) and 2.7 (RB). It was introduced in Update 1.97 "Viking Fury". Armed with a M4 (105 mm) instead of the standard M3 (75 mm) cannon, the howitzer grants the Sherman a much more powerful high-explosive shell to use against lightly-armoured enemies. When the HEAT round is unlocked for the cannon, its firepower against more heavily armoured vehicle increases substantially.

The M4A3 (105) (France) is equipped with 12 smoke grenades that can be deployed individually. The launcher is on the turret and shoots grenades along the gun's heading.

A downfall of the M4A3 (105) HVSS Sherman is its average mobility, slow turret traverse, and slow reload. Therefore, it is recommended to stick to allied tanks like glue or rely on hit-and-run tactics. The low velocity makes long-range shots relatively difficult. Never stay in the sights of tanks such as the long-barrel 75 mm Panzer IV F2/G, StuG III F/G or T-34/KV-1. These tanks can penetrate the M4A3 (105) HVSS Sherman's front armour, some more easily than others. Try not to get hit in the rear area as it will set the tank on fire and immobilize it, putting it in an extremely disadvantageous situation.

LVT(A)(4)(ZiS-2): don't assume that you are indestructible in a downtier. If you see the giant boat-like chassis of a LVT but with a long cannon on top, be very careful. This LVT is able to penetrate your armor easily within 400m, or if you are not angling the hull. To block its incoming shells, either angle your hull, be at a hull-down position or be >500m away from it. While its shells can tear through your armor with ease, you can also effortlessly destroy it with your HEAT by causing a hull break. While you reload, don't forget to wiggle around in a patternless way to mess up its aim -- its gun traverse rather slowly, making it quite hard to keep up with moving targets.

To engage the M4A3 (105), try not to engage its frontal armour if in a tank with BR lower than 3.7. It's frontal armour, despite what most will say about the Sherman's armour, is quite formidable and can deflect most incoming enemy round from light and medium tanks. This is why it is recommended to bring high-velocity guns like the M7 (76 mm) on the M10 GMC or the KwK40 (75 mm) on the later Panzer IV. If it can't be engaged from the front, manoeuvre to its side and rear armour, as these armour plate are extremely vulnerable to even 37 mm guns. When manoeuvring around the M4A3 (105), try not expose the tank for a prolonged time and move faster than the M4A3 (105)'s slow turret traverse rate (though beware that the M4A3 can compensate this slow turn by turning the entire body). If fast enough, a tank could also move past the 105 mm low-velocity shell and mess up the enemy's lead. This will eventually lead to a good shot on the M4A3's weak points. Another simpler and less mobile way is to lie in wait in a tank destroyer such as the StuG III for the M4A3 to move tight into the TD's line of fire, giving a clean shot to a vulnerable armour part. A good shot on a general part of the hull can ignite one of the many ammo racks strewn around the interior.

Each US tank regiment was equipped with a few 105 mm M4A3 at the end of WW2. Their role was to support the other armoured units by destroying fortifications and obstacles. The M4A3 (105) was not provided officially to the Free French Forces through the lend-lease program. However, as they were embedded under US command in preparation of the invasion of France, a few French armoured divisions received the tank from US Army stocks. The French 2nd Armoured Division received several M4A3 (105) under those circumstances in the UK in 1944. The 1ère and 5ème Divisions Blindées (1st and 5th Armored Divisions) were first equipped with M4A3(105) Shermans in April 1945. 18 M4A3(105) Shermans had been listed as authorized in January 1945, but they were not listed as on hand until April 29 - May 5. From images it can be seen that many of those tanks were M4(105)s, but at least one was an M4A3(105).

They saw combat action in France in 1944 and in Western Germany in early 1945.

After the war, many M4A3 (105) were supplied by the US to European countries as part of the Mutual Defense Assistance Act. France received 230 units they allocated to their cavalry units garrisoned in the French occupation zone in Germany. These M4A3 (105) never saw combat.