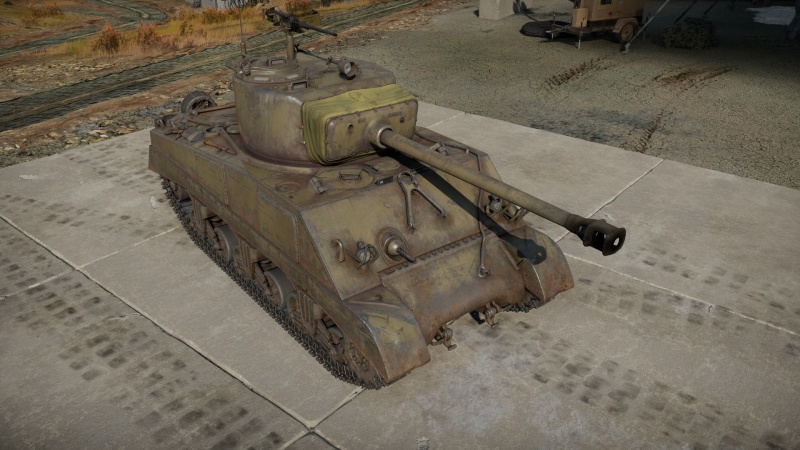 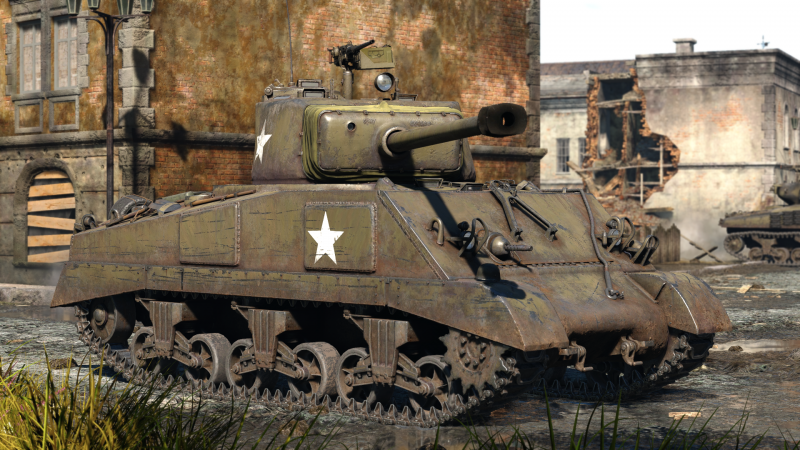 The Medium Tank M4A2 (76) W Sherman is a rank III American medium tank with a battle rating of 5.3 (AB/RB/SB). It was one of the first American tanks to be released with the American ground tree in Update 1.45 "Steel Generals". The tank is similar to the original M4A2 tank, except with the better 76 mm M1 gun in the T23 turret.

The most important modules to research are Parts and FPE. The stock M79 shot is inferior to the M62 APCBC shell in most situations, so researching the M62 shot module is a top priority. After that, the player may prioritize either mobility or firepower upgrades, depending on playstyle.

The M4A2 (76) W Sherman model ran on a GM 6046 diesel engine. Being built off the original M4A2, the hull construction was welded, which proved simpler to produce than casting. Early M4A2 variants had the front armour plate placed on a 56-degree sloping angle, but this design had protrusions on the driver and assistant driver hatches that created "shot traps" as these protrusions gave less protection than the frontal armour plate. This was fixed on later models with 47-degree angling instead, which eliminated the shot traps and made the frontal armour more effective than before. The M4A2 (76) W variant, as indicated by the name, mounted the 76 mm gun instead of the usual 75 mm. The "W" designation on the Sherman indicated that the vehicle had the wet stowage feature in response to complaints that the Sherman can easily catch fire due to exploding ammunition. The wet stowage encased the ammo containers in a liquid mixture that would douse the flames when penetrated or block flaming shrapnel from penetrating shots from hitting the ammunition. The containers also placed all the ammunition in the bottom centre of the tank, reducing the likeliness of it being hit by a shell as the penetrating shell must go through every armour and obstacle to hit the tank centre. This feature was only present after February 1944 and severely decreased the rate of Sherman fires. Of the 49,234 Sherman produced in World War II, 2,915 M4A2(76)s were produced from April 1944 to May 1945.

Despite the stock of 76 mm Shermans now available for them, the commanders opted to not bring any during the invasion of France in June 1944. The issues were logistical, as having a 76 mm armament would mean supplying a different set of ammo to the task forces. Another issue was that the 76 mm gun had a less lethal high-explosive round at hand, meaning combat against infantry or fixed emplacements would be slightly harder. This forced 75 mm armed Shermans to have to compete against the better armed and armoured Panthers and Tigers in the initial period of the invasion. The combat debut of the 76 mm Shermans as the M4A1 (76) was during Operation Cobra in July 1944, as a response to the growing German armour threat in Europe. The 2nd and 3rd Armored Divisions received 52 of these Shermans and the rest were distributed among the tank battalions in the infantry divisions. Deliveries of the M4(76) began coming into Europe from August 1944. The M4 (76) and M4 (75) Shermans served alongside each other, though the 75 mm Shermans were around in larger numbers and the opinions of the 76 mm cannon vary from a necessary addition to a burden. Nevertheless, the M4(76) began to be supplied among the tank battalions and armoured divisions to face the intense combat at the Siegfried Line. The 75 mm guns stayed as the primary armament of the armoured forces until the Battle of the Bulge, which had much American armour destroyed by the German onslaught of heavy German tanks such as their Panther and Tiger IIs. The negative response from both troops and press had Allied commanders, even Eisenhower himself, request only 76 mm Sherman to be delivered instead of 75 mm in response. The new units arriving in Europe after the Battle of the Bulge were all equipped with 76 mm Shermans. Despite their appearance, 75 mm Shermans were still in stock in the armoured divisions and were still held in high regards for their better capacity to destroy soft targets with high-explosive shells.