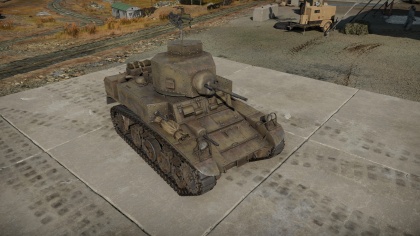 The Light Tank M3 Stuart is a rank I American light tank with a battle rating of 1.3 (AB) and 1.7 (RB/SB). It was one of the first American tanks to be released with the American ground tree in Update 1.45 "Steel Generals". With a better engine and transmission system than the M2 light tanks, the M3 Stuart is more able to manoeuvre the battlefield as a dependable light tank.

The first variant of the M3 Stuart light tank was very similar to the M2 light tanks. It had five machine gun armaments scattered around like the M2, but featured better armour and a better cannon with the 37 mm M6 cannon. The design did not have a turret basket for the crew and it was constructed out of rivets, which increased the chance of spalling in the tank. Nevertheless, the first variant M3 saw about 5,811 units produced. The second variant, the M3A1 Stuart, featured a new turret with no cupola on it, plus an added gun stabilizer. The machine guns on the hull sides were removed, so now the total machine guns were reduced from five to three. The design also featured a welded armour design to remove the weakness of riveted armour. 4,621 of this variant was produced from May 1942 to February 1943. The most used variant, the M5A1 Stuart, had a completely redesigned hull and turret, with the hull most notably having a full sloping frontal armour than the previous designs. This variant had about 6,810 units produced. All in all, the M3 light tank design and its variants were produced in massive quantities from March 1941 to October 1943 with a total of 25,000 units produced.