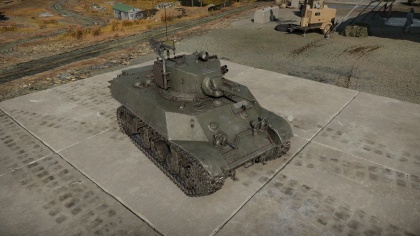 One of the best aspects of the M3A3 is its superior mobility. It has a top speed of 58 km/h and doesn't lose too much speed on soft terrains as it's tracked, making it one of the fastest tanks at the BR alongside with the famous BT series tanks. The turning ability is also amazing, since the hull is short and wide enough, allowing it to turn agilely. However, when trying to stop the tank while it is travelling at full speed, the brakes tend to be inefficient, giving it a long braking distance and making it very sluggish when stopping.

The M3A3 is armed with a 37 mm M6 cannon as its main armament, the same gun as the preceding M8. While being 1.3 BR higher than the M8, the M3A3's gun still packs a fierce punch if aiming at the correct area and firing at the correct distance. It is a small calibre fast-firing gun with a maximum penetration of 84 mm at 100 m (M51B1/B2 shell), being able to penetrate most of the opponents it will face. While it lacks the post-penetration damage to one-shot most enemy, it can quickly finish them off with its fast reload. The penetration and trajectory drop a lot beyond 500 m. Note that the gun has a vertical stabiliser, giving the player a huge advantage in some cases, but keep in mind that the stabiliser only works when the tank is slower than 10 km/h. 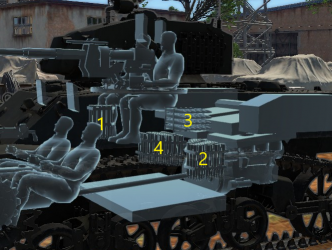