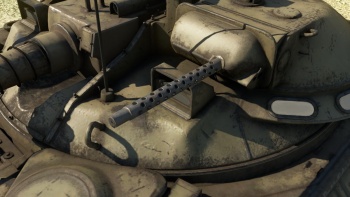 The M37 is an American .30 cal (7.62mm) medium machine gun. Like the L3A1 the M37 is a version of the M1919A4, and performs identically to it in game. Historically the M37 was used predominantly as a co-axial machine gun on the M48 and M60 Patton series of tanks, however in game these vehicles are armed with the later M73 (7.62 mm) machine gun, leaving the T92 as the only tank in the game using the gun. Being only a 7.62mm machine gun it is largely ineffective against all but the most weakly armoured, or open cabin, vehicles.

Like the L3A1 the M37 performs completely identically to the M1919A4.

The M37 can only be equipped with one ammo belt consisting of one Armour Piercing (AP) bullet, followed by one Tracer (T) bullet. Neither bullet has much penetration (maximum of 10mm), however the AP bullet performs much better than the tracer bullet.

The M37 performs identically to the L3A1 and the M1919A4. Like the M1919A4 it suffers from a somewhat low rate of fire compared to other , similar, machine guns such as the BESA and L8A1, firing 100 rounds per minute less (500 compared to 600). The weapon also has slightly worse penetration than the BESA (7.92 mm), which is the main co-axial weapon of British tanks, although does get a larger ammo belt.

The M37 is a post-war, improved version of the Browning M1919A4 machine gun, designed for use as a co-axial machine gun on tanks. Since it's introduction in 1919 the M1919 had been the standard co-axial machine gun for American tanks; however the design of the M1919 had some drawbacks when used in this role and by the late 1940s and early 1950s the US Military was looking to improve it. A contract was awarded to Saco-Lowell to produce their T-153 prototype of an improved M1919 as the M37, with the weapon being adopted and production staring in 1955.

The M37 differed from the M1919A4, which the weapon was based on, in that it could be fed from either side and featured a remotely operated trigger, along with some other improvements to make it better suited for co-axial use. The M37 was primarily used as a co-axial machine gun on M48 and M60 Patton tanks. in the late 1960s the weapon was re-chambered for the 7.62×51mm NATO round and designated M37E1, before eventually being replaced by the M73 (7.62 mm) machine gun in the early 1970s.

The M37 also saw limited use as a skid mounted machine gun on American helicopters during the Vietnam war. The M37 was the last production .30 caliber Browning to be adopted by the US military.