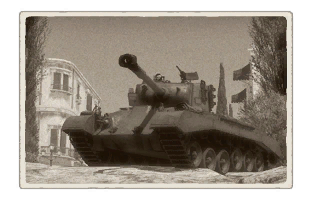 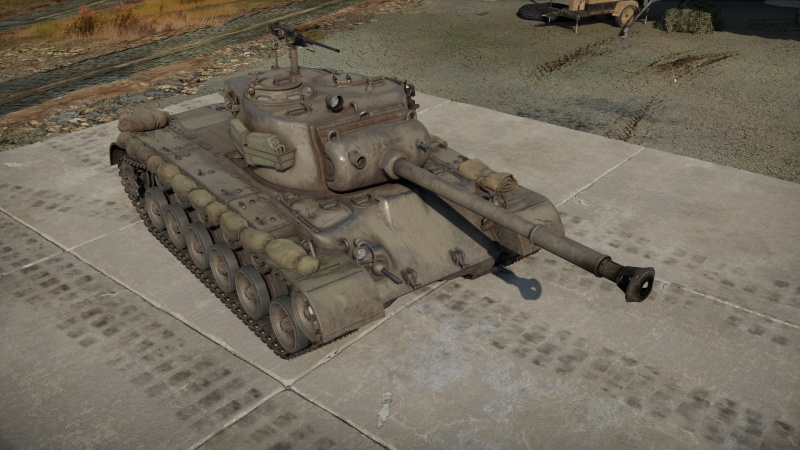 The Carro Armato M26A1 is a rank IV Italian medium tank with a battle rating of 6.3 (AB/RB/SB). It was introduced in Update 1.85 "Supersonic".

It's recommended to unlock Parts and FPE first, then the M82 and APCR shots, and after that focus on mobility.

The M26A1 is played in a very similar way to the normal M26, but it has more firepower and a slightly better APCR. One of the biggest differences is that you will be facing Allied forces instead of Axis forces. It's as versatile as the original Pershing but with a better gun. It can perform in many different roles in battle. It can be used for supporting allied tanks with long reload time as IS-2 or T32. Participate in flanking manoeuvres — your speed and agility are not brilliant but enough for that — and be successful in sniping and ambushing situations. Use the lower profile of Pershing compared to the Sherman's to navigate through. Your vertical guidance (-10°/20°) allows you to shoot from upper positions without exposing too much yourself. That's an advantage compared to Russians which have many ground depression problems.

The 90 mm gun owns a wide selection of ammunition to be used. The M82 APCBC shot with 140 g of explosive filler is extremely deadly. Usually, successful penetration with this shell can lead to a one hit kill on a vehicle. It lacks a bit of penetration for the rank this vehicle sits, but it's great for flanking shots. The M304 or M332 APCR shots give the vehicle the ability to penetrate thick armour but has poor performance against sloped armour. This means you need to aim for flat surfaces. Against a Tiger II (H) for example, this means aiming for the turret if he is looking directly at you on the gunner side. At that position, you can reliably penetrate the turret front from distances up to 1,800 m.

Although you are moderately armoured for your class, most enemies can easily kill you at this rank. A safe play style is a must. To reduce direct impacts in frontal engagements angle the M26A1, the V-shape frontal armour can deflect some shots. Your lower glacis is a very good target, try to keep it hidden from the enemy.

One downside to the Pershing is the engine. The power to weight ratio is poor and does not allow for very quick manoeuvring. It uses the same Ford GAF that can be found in the late series M4 Medium tanks, with nearly 8 tons more weight. Being slightly underpowered, the Pershing has a hard time climbing hills. You will need to know the maps and areas you are operating and use them wisely.

If you've been able to flank an enemy, your first shot is decisive. Always shoot the breech to knock out the gun. The best ammo to do this is the M304 or M332 APCR shots, or the M82 APCBC shot. The APCR will guarantee a 100% successful shot, while the APCBC can also work very good and might destroy everything inside the turret. But some Germans have tracks in the hull's sides and if enemy saw you and is turning the turret, the M82 could bounce. Make sure you don't miss. The large sides of German heavies are tempting targets but its very easy to over pen with the wrong ammo like the M77 shot (AP) or M304/M332 round (APCR). If you flank a SPG like a Jagdpanther, a Jagdtiger or a Ferdinand just aim to the engine to immobilize it and you will have all the time needed to knock it out.

In arcade battles, it is much harder to flank and ambush enemy tanks because of the player-name system. However, the tank is still very playable and you can do different tactics depending on the situation. For Urban environments, it's best to move with the team and only poke your head out when you have a good shot and the enemy tank isn't aimed at you. In open terrain, you will still be able to use the hills to your advantage and side-shot / pot-shot enemy tanks. The main rule here is don't show your sides and stay low.

In realistic and simulator battles, The M26A1 shouldn't be in the toughest part of the match facing very heavily armoured enemies. It's better to stay behind front lines supporting or try a flank manoeuvre, you can't be spotted in the minimap. The battle rating can make you be up-tiered to some top tank battles in simulator mode. The compression and matchmaking can put you into situations where you have to fight Cold War era Soviet tanks. Which are especially hard to pierce, even from the sides.

The Italian Army received Pershing tanks from the USA as part of the Mutual Defense Assistance Act at the beginning of the 1950s. The previously supplied M4 Sherman had become obsolete and needed replacement. The US Army armoured units stationed in West Germany transitioned from the M26 to the M47 Patton from 1952 through 1953. The M26 tanks, including the M26A1 version, were no longer needed by the US Army and thus given to Italy and France. Italy used their M26 Pershings operationally until 1963, after which they were gradually replaced by more recent M47, M60 and Leopard 1 tanks.

The Italian M26A1 saw service in the Italian Army at the Eastern border with Yugoslavia but never saw combat action.