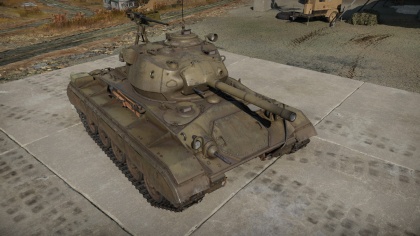 The tank offers a 75 mm M6 gun, which has a slower reload than the Sherman M4/M4A1's 75mm M3 gun. the reload is not actually due to any difference in the gun (beyond it being somewhat lighter than the M3) but due to the smaller confines of the vehicle being an obstacle to reloading not seen in the M4/M4A1. Its shells come in handy for certain tanks; they generally penetrate armour very well. It is rare to experience a ricochet or be to unable to penetrate any armour.

a final option is to essentially make use of your tank's mobility to fire, move, fire, move, fire, so as to prevent enemy tanks and tank destroyers from accurately guessing range. this can be difficult however, as you must be very versed in your own tank's ballistics to make shots, as you will have to estimate range on the fly. don't think this means firing on the move - if you are going faster than 10mph, the stabilizer will not allow for accurate shots, and it is only a vertical stabilizer.