As with any vehicle, the M1A1 finds itself at a serious disadvantage while stock. Without access to thermal imaging or the M829 APFSDS round, users will need to play more carefully. While the M830 HEATFS round is powerful, it struggles against composite armour and ERA, as well as having lacklustre post-penetration effects. Generally stock M1A1 tank commanders should avoid areas with lots of foliage, as here the lack of thermals will be especially detrimental. Additionally players will have to aim more carefully to deal effective damage with the M830 HEAT round.

The M1A1 is a 10.3 glass cannon without the cannon part most of the time. The M829 APFSDS round has plenty of penetration only against non soviet opponents, but it should be easy to destroy enemy Leopards if shooting in the lower right part of the hull, detonating the ammo. The gun, ammo, and reload rate are comparable to other 10.3 vehicles.. The turret protection on the M1A1 is not capable of stopping any of the best APFSDS rounds at its tier. Rounds like 3BM42 Mango are able to penetrate at ranges up to 3,500 m. With this in mind, players should not rely on their armour.

The M1A1 is capable at long range, but is outclassed by many other vehicles. The cannon is powerful, but not especially so compared to its adversaries. The biggest issues the M1A1 will face in regards to long range engagements are the turret armour and lack of commanders thermals. While the M829 APFSDS round will fail to penetrate the turret cheeks of vehicles like T80U and Leopard 2A5, their rounds will have no such trouble with the M1A1. The lack of commanders thermals makes it difficult to scout for enemies while in full hull down, although players can bind a button to switch to the machine gun as their main weapon. This will allow them to see through the machine gun sight with a thermal imager, giving them an elevated vantage point through the thermals. 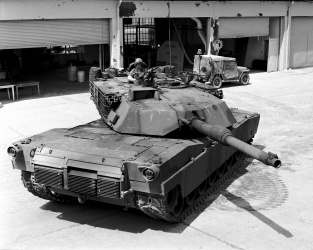