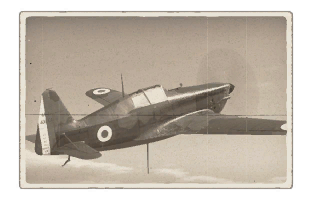 The MS.406C1 is a good general fighter for newer players (though, experienced pilots should not discount this aircraft). This aircraft has a good climb-rate, is maneuverable and retains energy allowing for repeated dive and climb situations. This aircraft performs its fighter role, but with having a Hispano 404 cannon installed, it can also take on the role of a bomber-hunter or soft-ground target attacker.