Difference between revisions of "Leopard 2 PL" 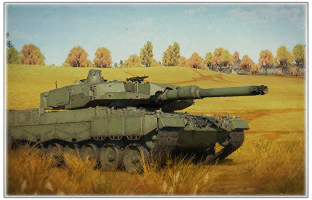 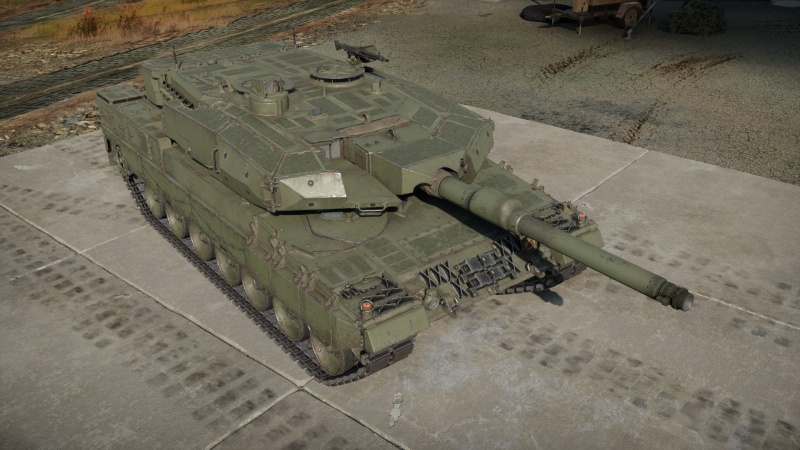 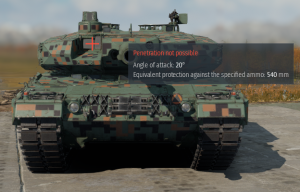 Due to volumetric armour, HEAT-FS rounds are not able to penetrate the GPS 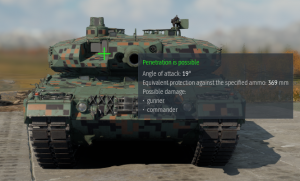 The Leopard 2PL features the strongest and most armoured turret for the Leopard 2 series tanks seen in game so far. It features a stronger turret armour compared to all the Leopard 2 seen in game but has no add-on hull protection as the Strv 122A and the Strv 122B PLSS. This version is based on the 2A4 series, and so features the same problems with the hull armour, barely enough to stop rounds seen in game. However, it completely removes the amour issues from the turret. At first sight, the GPS (Gunner Primary Sight) can be seen as the main weak point since it is the same weakspot the 2A4 has. However, taking into consideration the new armour package, hitting the GPS makes is far harder without hitting add-on armour first. As seen in the image, the GPS is mostly safe from HEAT-FS and other chemical shells due to the volumetric armour, meaning they will either prematurely explode, or simply not be able to penetrate the 500+ millimeters of protection offered by the add-on armour package. However, for sub-calibre rounds like APFSDS, the composite armour offers less protection. As seen in the Leopard 2A4, any hit to the GPS means both gunner and commander will be knocked out. However, chances of hitting the GPS in the exact place for it to disable both crew members is reduced immensely thanks to the add-on armour. Most of the time, any hit to the GPS will result in the knock-out of the commander only with partial damage to the gunner. As seen in picture, the area highlighted is the place in which both the gunner and commander can be killed with a single shot (more specifically the lower section of the rectangular optic in the GPS).

The 2PL is also the first tank in game to be able to withstand more than one hit of CL3143, DM53 and 9M119 to the turret. Previous Leopards (specifically the 2A5 and 2A6 including the Strv 122) can withstand 9M119 to the turret. However, the wedge panels of these tanks are exploded with a single hit, which means the turret is exposed to further enemy fire. This changes with the 2PL. Due to the fact that the armoured add-on package is a permanent part of the tank, it is able to withstand up to 4 9M119 hits and continuous firing of the CL3143 and DM53 at any ranges. Despite this, all of them are able to penetrate the gun mantlet with no issues at all. However, for your enemies it is rather tricky to achieve this since if they are aiming at the turret's front, you can also kill them aswell. Moving to turret's add-on side armour, it is able to withstand all types of HEAT-FS and chemical shells seen in game. However, the armour protection is increased gradually as we move to the turret front. The first section of the side armour (the one covering the smoke launchers) is relatively weak and is able to be penetrated by all ammunitions seen in the battle-rating. The second section (covering the first half of the sides of the crew compartments) is able to withstand all HEAT-FS in game and MILAN ATGM (meaning is able to withstand up to 580 mm of penetration). The third section of the side armour (covering the second half of the crew compartment) is able to withstand all penetration up to 800 mm of CE (Chemical). When we talk about KE (Kinetic) protection, the side armour offers little to no protection whatsoever, and can be penetrated by nearly all high-caliber weapons at it's battle rating. 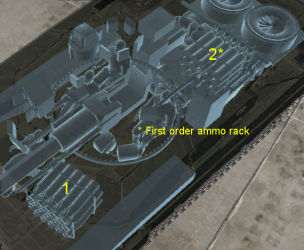 The Leopard 2PL is an ongoing joint project for the modernization of the Leopard 2A4 tanks in service with the Polish army, currently being carried out by the German company Rheinmetall AG and the Polish state-owned Polska Grupa Zbrojeniowa. The aim of the program is to improve the combat efficiency of the elderly Leopards to 3rd generation plus level  main battle tanks.

The main areas of modernization are improving the tank's protection and firepower. The Leopard 2PL has additional modular turret armor (forehead and sides), enhanced protection of the gun mantlet. On the turret’s rear, massive boxes appeared, which under some circumstances can work as spaced armor for protection against HEAT shells. The L44 cannon remains the same, but the upgraded fire control system has modern thermal imaging equipment and is adapted for firing more powerful rounds. Since the power plant and chassis of the Leopard 2A4 remained unchanged, the additional protection of the hull had to be abandoned, as the weight of the tank approached 60 tons. In total, 128 Leopard 2A4’s in service are to be upgraded under the Leopard 2PL program.