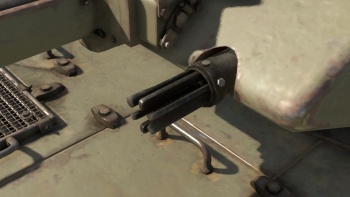 The L94A1 is a British 7.62 mm chain gun, it is a license-built copy of the long-barrelled version of the American Hughes EX-34 7.62 mm chain gun. In game the weapon can currently only be found as the co-axial gun on the Warrior. Being only a 7.62mm machine gun it is largely ineffective against all but the most weakly armoured, or open cabin, vehicles.

The L94A1 performs nearly identically to the L8A1 and FN MAG, having the same rate of fire and ballistic performance.

The L8A1 can only be equipped with one ammo belt consisting of two Armour Piercing (AP) bullets, followed by one Tracer (T) bullet. Neither bullet has much penetration (maximum of 10mm), however, the AP bullet performs much better than the tracer bullet.

Due to the very low penetration of this weapon, it is largely ineffective against enemy armour (although you may be able to penetrate some vehicles with extremely thing armour). The gun is primarily useful for incapacitating exposed crew members in open-topped vehicles (although there are few such vehicles at the battle ratings this gun is found at). The gun can also be used for marking enemy vehicles and obscuring the view of enemy players (shooting at their gun sight). You can use the gun against aircraft however it does minimal damage, and being co-axially mounted means it can often not be brought/kept on target against aircraft.

The Hughes EX-34 7.62 mm chain gun was developed by the Hughes Aircraft Company in the 1970s as a compact co-axial weapon for armoured vehicles. It was evaluated in the US as a replacement for the co-axial gun on the M60 tank, and although being praised for its performance was not selected. From 1996 - 1998 the EX-34 was produced under license as the L94A1 by Heckler & Koch in the UK and fitted to a number of the UK's different Armoured Fighting Vehicles (AFVs).