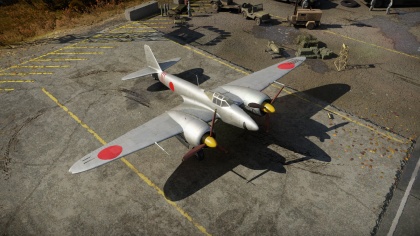 One should fly the Ki-96 in its stated role: Interceptor. When engaging bombers, be sure to approach from oblique angles and never tail one, as you have no bulletproof glass to protect your pilot from snipes. While bombers with good aim can kill you, you can do the same to their plane in seconds when you land your devastating 37 mm cannon and 20 mm cannon shots. If all you encounter is fighters, it can make for a decent Boom-&-Zoom aircraft with its good speed, climb rate and armament. As a general rule, never turn fight. While the Ki-96 has a good turn rate for a Twin-Engined fighter, it is out turned by most of its opposition, and same goes for its speed. With these in mind, always try to engage fighters with an energy advantage, although be careful as the Ki-96's roll rate heavily stiffens above 400 Mp/h or 643 Kp/h, which makes it hard to control at high speeds.

The Ki-96 was a twin-engined heavy fighter developed by Kawasaki Aeronautics in 1942 after the success of their Ki-45 (Disambiguation) line. Like the Ki-45, it was a two-seat, twin engined fighter with larger and more powerful Ha-112 Radials to replace the Ki-45's Ha-104's. It was intended to replace the "Toryu's" for the IJAAS, but the Imperial Japanese Army Aviation Bureau insisted that it be converted to a single-seat fighter. The first prototype made retained the cockpit canopy intended for a two-seat fighter, and the next two prototypes were fitted with smaller canopies.