Difference between revisions of "Ki-49-I" 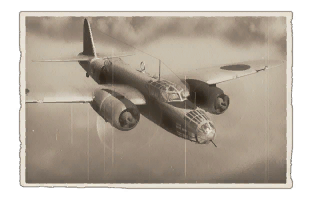 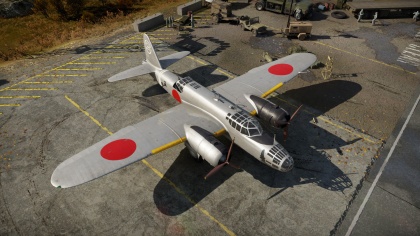 The Ki-49-I can be outfitted with the following ordnance:

The Ki-49's role is a low-altitude medium bomber capable of destroying ground targets such as pillboxes and tanks. Although hindered by a low total bomb capacity, this aircraft is renowned for its impressive manoeuvrability. This being said, it is very easy for the Ki-49 to hover above an area and drop all of its payloads rather quickly. Heavy bombers such as the G8N1 Renzan have a harder time due to their sheer size and slow rate of turn. Make sure to select the 4 x 250 kg bomb load outs if attacking targets like tanks, pillboxes, or smaller ships.

If attacked by fighters, it is important to remember and recognize the Ki-49's turning capabilities. It is actually possible to win lateral turn fights against fighters with this aircraft. Try not to act like a "sitting duck" because the Ki-49 features little armour protection and has limited defensive capabilities as far as weapons go. With only 7.7 mm machine guns, this aircraft is not suited for air to air combat against fighters. The best belt to use is the armoured targets belt. If you can't shake someone off your tail aim for the pilot or the engine - your only hope of destroying the enemy plane. Pulling hard manoeuvres will throw the enemy off and allow you to set up for more defensive fire.

This aircraft has the ability to hold up to 1,000 kg of bombs in several different variations. 12 x 50 kg bombs, 4 x 250 kg bombs and 1 x 500 kg bomb. Use the 12 x 50 kg bombs to attack light tanks and light pillboxes. They are not viable against bigger targets since direct hits are needed to destroy. This loadout is particularly useful on maps like Zhengzhou where there is an abundance on non-moving targets (light pillboxes). Use the 4 x 250 kg bombs to destroy heavier targets such as medium tanks, pillboxes, destroyers, and cargo ships. They are also the best Loadout against mini-bases. Use the 500 kg bomb to destroy targets like carriers.

In Arcade battles, this aircraft is particularly proficient at bombing bases, especially with a maxed reload crew skill. Since the Ki-49 can virtually turn on a dime, instead of having to line up longer bombing runs like heavy bombers this aircraft can "hover" over the base or airfield and attempt dive attacks. It's also possible to use this same tactic against pillboxes or tanks. With fighter cover, a good reload time skill and good aim it's possible to destroy dozens of ground units.

Being a bomber, speed is not necessarily an important attribute, however, payload and armament are. Upgrading the bombs allows for more target flexibility and damage potential while turret upgrades will help survivability. the turret belts and the New Turret upgrades are useful. The New Turrets upgrade will allow you to fire the turrets for longer periods of time and having access to multiple ammunition belts is also helpful. The engine upgrades are also useful in that they will help you reach your target faster and will control engine temperature. Having all of the weapons upgrades will help drastically in unlocking the other modules on this aircraft.

The best way of grinding with this aircraft is to play cautiously and to use communication. As with any bomber, if you're caught alone or off guard you are an easy target for enemy fighters and attackers. Although not a sure tactic, having a fighter escort will boost research point gains drastically. This goes for both arcade and realistic battles. Generally, try to destroy as many targets as possible without wasting bombs. If done in a speedy fashion it is possible to drop multiple payloads in realistic battles. The same goes for simulator battles. In arcade battles, having a high reload speed and a fighter escort will allow for constant bombardment. If done correctly, flying the Ki-49-I in all modes will net you large amounts of research points.

The Ki-49 first saw service in China. After the outbreak of the Pacific War, it flew in New Guinea Australia. The Ki-49 was also used in the defence of the Philippines. The first unit to receive Ki-49 Donryu was the 61st Sentai in China. An unknown amount of Ki-49s were involved in the Battle of Okinawa in 1945.

Twin-engine monoplane medium bomber with retractable landing gear and tail wheel. The development of a new medium bomber (heavy bomber, by Japanese standards) for the Japanese Army Air Force began in the spring of 1938. The new airplane was to replace the Mitsubishi Ki-21 bomber.

Based on Japan's experience in its war with China, special attention was given to providing the bomber with high speed capabilities and strong defensive weaponry so that it could operate without fighter cover. The crew needed protective armor, and self-sealing fuel tanks were essential.

The Ki-49-i was equipped with two air-cooled 14-cylinder radial Hakadzima Ha-41 engines rated at 1250 hp each. The plane's defensive armament included 1 Ho-1 Type 97 20mm cannon in the upper fuselage and five 7.7mm Type 89 machine guns (which were significantly modernized versions of the Vickers), located in the nose, sides, and underneath the aircraft. In addition, one gun was located in a tail turret, the first time such a turret was employed by an aircraft of the Japanese army. The bomb bay, which occupied almost the entirety of the aircraft's middle section, could carry bombs ranging from 100 to 250 kilograms, in various combinations. A normal load was 750 kilograms, an overweight load, up to 1000.

The new planes began to be delivered to the front in August of 1941 and were widely used over New Britain and New Guinea as well as in raids on the Australian port of Darwin.

It soon became evident that the Ha-41 engine's power was insufficient, and the controllability of the aircraft suffered as a result. The bomber's speed was not high enough to outrun the newer fighter planes. However, pilots approved of the plane's armor, the power of its defensive weaponry, and the reduction of that weaponry's "blind spots".