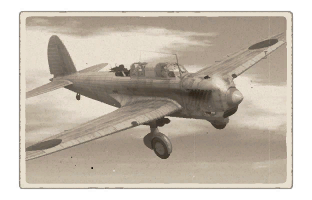 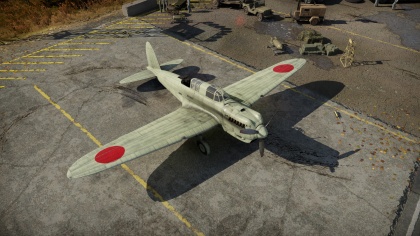 The Ki-32 also is slow even when upgraded. With a stock top speed of 395 km/h and a spaded speed of 423 km/h, you will struggle to outrun most, mono-wing planes.

One of the two major downfalls of the Ki-32 is the limited protection it has. With an open cockpit, a fuselage made of fabric and wood, and no armour, any plane with guns can shoot it down. However, as noted, the Ki-32 is amazingly maneuverable, increasing its survivability if one knows how to use it correctly. It also mounts 2 defensive 7.7 mm Type 89s, which at this rank is quite powerful due to its high fire rate and the large area it can cover.

I-153/I-16's. The Russian biplanes and early Chaikas are universally feared planes. You can outmaneuver both of them, but they are quite fast for their ranks and sport 2-4 ShKAS machine guns that can mount entirely Incendiary rounds, which will shred your weak fabric and wood body in seconds. These ShKAS machine guns are arguably the best 7.62 mm guns in the game due to their high fire rate, good accuracy, powerful incendiary belts and good stopping power for their rank, so try not to get hit by any shot as they have a high possibility of critically damaging your plane, if not setting it on fire. Avoid them if possible, and if one thrusts a fight on you, seek assistance from teammates. Do not try to engage them, under any circumstances, as only one measly 7.7 mm will not be enough to kill them, and very soon, you will find yourself shot down.

D.501/D.510. The Dewoitine's are exceptionally dangerous opponents. They are highly maneuverable, have decent speed, and are the only planes at a BR of 1.3 to mount a cannon, and what a cannon it is (Hispano 404). One shot of their Hispano is enough to down your plane. However, their airframe is quite weak overall and have a very vulnerable open cockpit. If one engages with you, attempt to make him use all of his cannon rounds then try to snipe out his pilot with your gunner.

The Ki-32 was developed in response to a 1936 Imperial Japanese Army specification to replace the aging and inferior Ki-3. Both Mitsubishi and Kawasaki were requested to build two prototypes by Christmas. The specification required a top speed of 400 kph at 3,000 m with a normal operating altitude from 2,000 - 4,000 m and the ability to climb to that height in 8 minutes. The companies needed to choose between utilizing an 825 hp Mitsubishi Ha-6 radial, an 850 hp Nakajima Ha-5 radial or an 850 hp Kawasaki Ha-9-IIb liquid cooled inline engines.