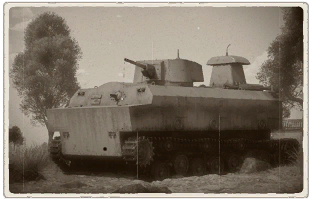 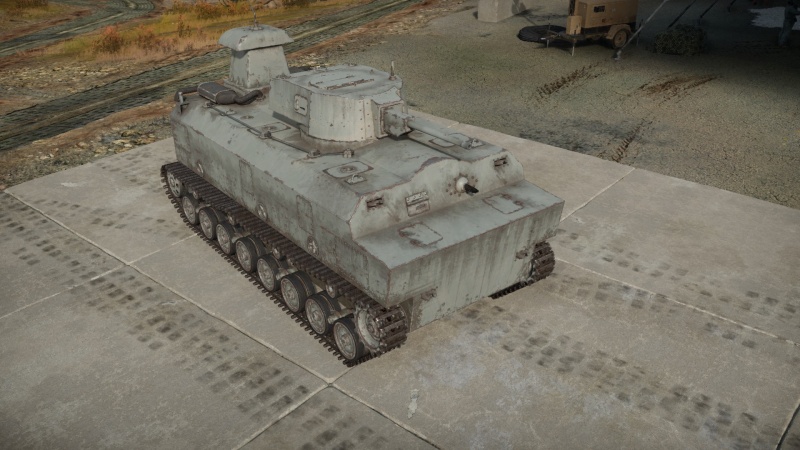 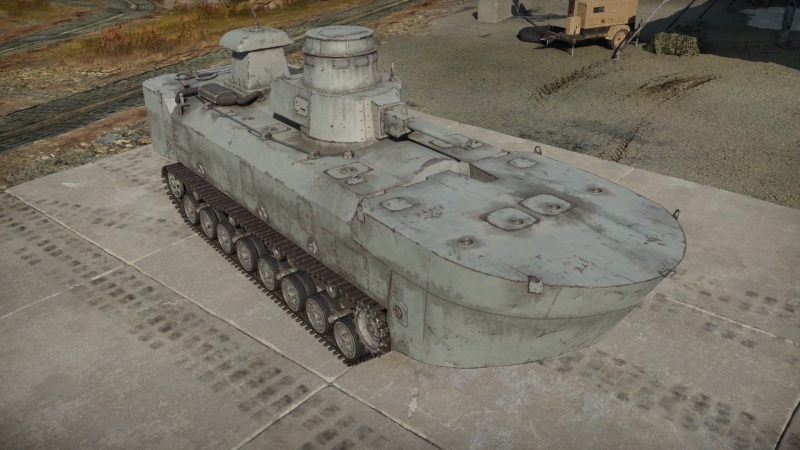 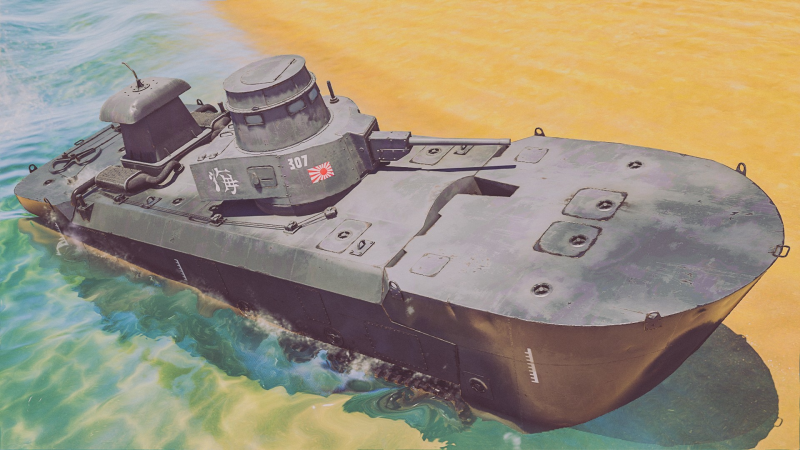 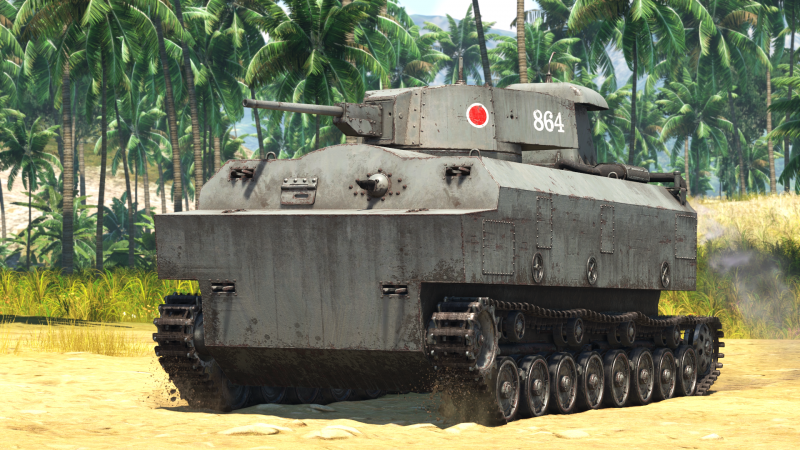 The Type 3 Ka-Chi is a premium gift rank I Japanese medium tank with a battle rating of 2.0 (AB/RB/SB). It was introduced during Update "Red Skies" as a reward for the 2021 Summer Landing event.

This vehicle might seem familiar to some Japanese players as this is essentially a waterborne Chi-He, boasting the same turret, max armour of 50 mm, and the same engine. Allied players will find the Ka-Chi reminiscent of the LVT(A)(1) as both are amphibious tanks with similar configurations.

At a first glimpse, the armour might look unappealing with weak sides but if one takes a literal dive in the armour profile it will become apparent that the tank isn't built like a conventional tank but like a submarine. It has a light hull and a pressure hull which both are 10 mm with air in-between, which can protect the tank from depths up to 100 m and tank cannons alike, even withstanding low-tier HEAT rounds of large calibres.

The frontal armour of the Ka-Chi will look very similar to that of the Chi-He maxing out at 50 mm, which with installed pontoons, will become even better as the floats act like spaced armour, defeating most HEAT & HE rounds and stopping some AP shells that lose their velocity before they reach the main hull.

The unconventional armour profile of this tank including the large spaced-out crew makes for a very survivable landship of a tank that shouldn't be messed around with.

Once pontoons are installed, they count as additional spaced armour for the front and back of the vehicle, stopping nearly any HEAT or HE shell from damaging the main hull. A large commander cupola is also installed, which doesn't connect to the turret as the hatch is closed. The cupola can be a fake weak spot that inexperienced players may target, thinking that a shot will kill a commander and splash down into the turret crew. Take note that is a legitimate concern when facing certain enemies like the 15cm sIG 33 B Sfl and Spj fm/43-44 as their large calibre HE shells can do exactly this.

While this tank might share the same engine as the Chi-He, it still is larger and heavier, resulting in less power-to-weight ratio and worse acceleration. With the big and bulky profile, it still can keep up with the slower medium and heavy tanks of its BR. Climbing hills and getting around corners will be slightly tougher than the average tank especially with pontoons installed. The extremely long length of the vehicle with floats can sometimes get the vehicle stuck on sharp angles and drops where the front and back pontoons get stuck on upper and lower ground and the tracks are unable to catch the ground.

The pontoons also add 2,300 kg of weight, resulting in worse mobility. It makes the amphibious Ka-Chi an even larger target than before, becoming the largest tank in the game in both length and height. Visibility is also a concern as the front pontoon completely blocks Driver's View.

The Ka-Chi is amphibious regardless of whether pontoons are installed or not and can cross bodies of water by itself. The pontoons are for making the tank seaworthy, historically, and for forming a streamlined boat bow for the tank. The Ka-Chi can go 10 km/h (6mph) forwards in the water which is the high average for amphibious vehicles, and certainly faster than those that can't swim.

Comparatively to other light and medium tanks at this battle rating, the 47 mm Type 1 gun is quite surprising with 77 mm of penetration at point-blank range and has a good reload speed. Plus, this fires APHE shells, which deal great post-penetration damage. Comparatively, the 45 mm 20-K gun on Soviet tanks at ranks 1 and 2 has only 62 mm of penetration in similar conditions.

When the pontoons are installed, the cannon's maximum depression angle is reduced by 3°, making it harder to target close enemies in front of you. 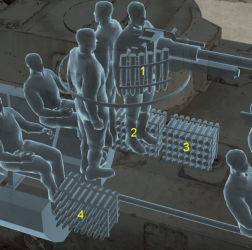 Ammo racks of the Ka-Chi

The only functional machine gun mounted in the Ka-Chi is the hull-mounted bow machine gun which, once pontoons are installed, is disabled. Only once the pontoons are uninstalled can it be utilized, to very limited extents. It has a narrow arc of firing, a small clip size and only fires rifle-calibre bullets: just good enough to deal with trucks and exposed crews but not enough to penetrate a significant amount of armour. It is up to the player to choose between more defensive armour or more offensive firepower.

When downtiered, the tank can survive hits from most enemy shells at its BR. The surprisingly good armour and the good survivability make it a heavy tank. Its 47 mm gun won't have any trouble penetrating the enemy armour at its BR. The Ka-Chi's armour is thick, but also flat: angling gives the tank a higher chance to bounce shells.

When uptiered it should play as a support tank. Some enemy guns at the higher low-tier like the Russian ZIS-2 and British 6pdr OQF Mk.III can penetrate the armour of the Ka-Chi without trouble (even when angled). The 47 mm cannon will also begin to struggle to penetrate enemy tanks.

In mixed ground battles, there is a high chance that planes will see you due to its large size so avoid open fields or large areas when planes are in the air. The ability to swim is not a big advantage but on some maps, you can use it to flank the enemy. Swimming also allows the Ka-Chi to take a hull-down position, hiding most of its massive hull underwater.

The very high mounting of the turret allows it to sit behind and shoot over things that most tanks cannot, such as large rocks, lumber piles, and steep hills. This means that it can take hull-down positions that leave only the turret exposed, increasing survivability. One tactic is to use it as a sniper tank or mobile bunker. The punchy cannon and the ability to take unusual positions allows the Ka-Chi to hold down specific areas of the map quite easily.

Another tactic is to use the Ka-Chi as a breakthrough heavy tank. Although significantly riskier, the survivability against low-calibre cannons and HE/HEAT resistance allows it to tank shots and push through enemy lines. Try to keep friendlies close and keep your enemies at a distance as a lone Ka-Chi is easily flanked and swarmed.

The Ka-Chi, like a few other premium heavy vehicles of the rank such as the T-35, B1 ter and Neubaufahrzeug have an unwritten ability to rally friendly tanks when they charge. The stunning mass of the vehicle, its relative rarity, and the fact that it is used by more experienced players can inspire friendlies to group around the Ka-Chi as they are protected behind the large hull and can trust that the player using it will help lead them to victory.

With the success of the Navy's Type 2 Special Motorboat Ka-Mi, a more ambitious project to create a bigger, more advanced vehicle was forwarded. Called the Type 3 Special Motorboat, it was not only meant as a fully ocean-going boat but capable of travelling submerged underwater as cargo on the back of a submarine. To withstand the depths (reported as deep as 100 m / 330 ft), the primary pressure hull was a cylinder between 2.0 and 2.1 m (6 ft 7 in) in diameter. Most of the machinery was taken from the Type 1 Chi-He medium tank, presumably to save costs and development time. Like the Ka-Mi, removable sea-going fore and aft pontoons were part of the design, however, they were not required to be amphibious. Navigation was accomplished by rudders attached to the rear pontoon. The vehicle-mounted twin screws could also be independently controlled to maintain a level of steering without the rudders. Nineteen units were reportedly built and extensively tested to success but were never used in combat as they were held back for the defence of the Japanese home islands.

The adoption of the Ka-Mi amphibious tank design opened up interesting opportunities for the General Staff of the Imperial Japanese Navy, when during a landing from the sea, it became possible to provide fire support with tanks that could go into battle immediately from the sea. The light Ka-Mi, however, did not provide the necessary firepower and did not have sufficient protection. In 1943, a new amphibious tank was created on the basis of the quite successful Chi-He medium tank, which received the designation Type 3 Ka-Chi. To transform into an amphibious tank, the Chi-He underwent a rather deep modernization: the armor plates were dismantled, the suspension was lengthened, equipped with two additional pairs of road wheels and rollers, a tall snorkel appeared over the cover of the engine compartment, and a distinctive dome appeared over the commander's cupola. The Ka-Chi received front and rear pontoons, as well as a set of rubber plugs to seal the hull. The new amphibious tank successfully passed tests, however, by the beginning of mass production, the situation in the Pacific forced the naval authorities to concentrate all production capacity on the construction of new ships and carrier-based aircraft, therefore, by the end of the war, about two dozen Ka-Chi were produced, none of which were ever used in battle. 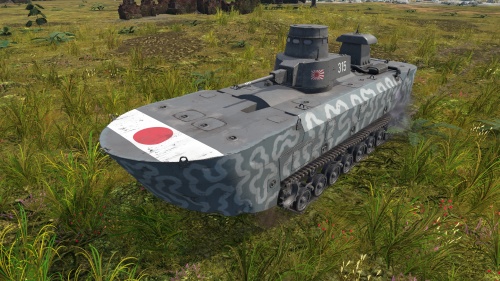