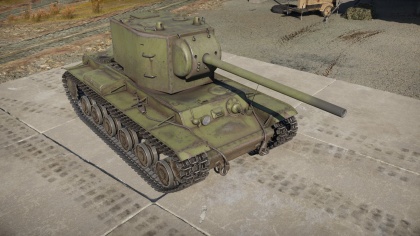 The KV-2 (ZiS-6) is a heavy artillery tank. It is an experimental up-gunned variant of the KV-1 and KV-2 models built with an emphasis of destroying fortification, bunkers and enemy armoured vehicles. Although the armour thickness is the same as the KV-1 and KV-2, this vehicle is notable for having a more powerful cannon; although smaller in calibre to the KV-2, has much higher armour penetration values. In fact, the tank fires Armour-Piercing High-Explosive (APHE) shells with the highest penetration value out of all USSR tanks both at and below its battle rating. With about 190 mm of penetration in normal combat conditions and with 19 grams of explosive filling carried by the default B-420 shell, this tank will obliterate all enemy vehicles upon penetration with the exception of some light-armoured vehicles of which the contact fuse may fail to detonate. Despite its significantly powerful armament, the KV-2 (ZiS-6) is plagued by inherited weaknesses shared within the KV lineage of tanks. At its battle rating, the tank's armour will be of little protection against other hostile vehicles it will face. With just 75 mm armour all around and including the largely slat and exposed turret, almost all tanks and the ammunition they fire (a significant number of which have double the penetration value of the thickness of the KV's armour) will penetrate with little to no difficulty. Tightly packed and strewn ammunition both within and at the base of the turret will more than likely turn the entire vehicle into a erupting volcano upon being struck by stray shells, if not outright cripple the crew to the point the fire-rate is reduced to virtually a standstill. This tank is a spiritual successor of the original KV-2 in combat operations. Although a high crew count of 6, the rate of fire is relatively slow but faster than its predecessor with a higher velocity and flatter trajectory. The same is unfortunately to be said for its slower turret traverse, reverse and acceleration speed and heavy weight.

Due to its unsatisfactory manoeuvrability, fire-rate and traverse speed, close-quarters engagements against multiple enemies in small-spaced environments are highly discouraged unless absolutely necessary. The tank is too large and slow to escape or retreat from what would be overwhelming situations, and too large to hide. Should the need to enter tight alleyways and streets if towns or cities, escort either by or with other friendly units are of utmost importance and should best serve in a support capacity should more heavily armoured opponents are encountered. This tank excels best at long to medium range engagements on largely open areas. Due to its poor 3 degrees of gun depression - a trait inherited by all USSR armoured vehicles, engaging hostiles by cresting over the tops of hills are highly discouraged unless absolutely necessary. Should clusters of multiple hostile vehicles are encountered in combat, the optimal tactic is to wait for them to split up before engaging them one-by-one if the opportunity presents itself.

Another class of vehicles of significant threat are fast-tanks such as the M18 GMC or T-34 tanks capable of running circles in ways the KV-2 (ZiS-6)'s slow turret traverse rate and poor manoeuvrability will be unable to cope in close-quarters engagements. The last type of vehicle of concern are low-chassis tanks such as the ASU-57, ASU-85, PT-76B and even some German tank-destroyers are so small to the point they safely drive up to the vicinity of KV-2 and be immune from retaliation due to the 107 mm gun situated on a high turret and only 3 degrees if traverse up and down.