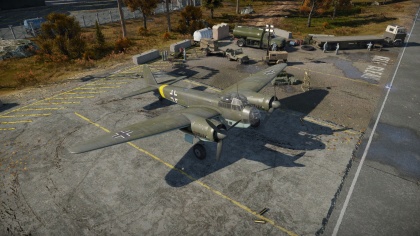 "The JU 88 high-speed horizontal and dive bomber was one of the most versatile aircraft of WWII, and the JU 88A-4 was the most well-known and highly mass produced of all the variants. Unlike its predecessors, the plane had a new 1,400 PS engine, letting the bomber move around at high speed. After experiencing difficulties in the Battle of Britain, the aircraft received additional metal sheeting in the cockpit walls and floor, as well as an armored pilot's seat, shielding the pilot's back and sides. New MG 81 belt-fed machine guns replaced the older MG 15s that had previously been fitted. The increased aircraft mass also necessitated stronger landing gear with a bigger wheel diameter.

The JU 88A-4 was used against the Soviet Union in their maiden flights, and remained in the ranks until the end of the war. During WWII, nearly 15,000 JU 88 bombers were built in different variations."