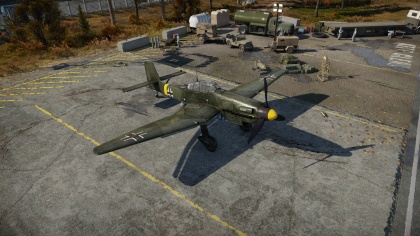 At the current Battle Rating at 2.3, the Ju 87 D3 is not very fast, however, it is decently fast in a dive. The Ju 87 is fairly durable as well, taking a decent amount of 7.7 mm and 12.7 mm fire before being fully disabled, but this doesn't mean you should fly in a straight line. This dive bomber has a very low stall speed and is very manoeuvrable at lower speeds giving it an edge in a dive bomb run or a turn fight. The offensive and defensive armament are a bit underwhelming, but given the chance, it can still take down planes. In a dive attack on tank columns, it can deploy air brakes so you don't slam into the ground.

Its armament consists of 2 x MG 17s mounted in the wings, very good for killing soft ground targets like Armored cars and AA, and has a good bomb load for killing medium tanks, pillboxes, destroyers and bases easily. Its defensive turret consisted of two fast-firing Mg 81Zs but still not enough to shoot down planes reliably.

In Arcade Battles you should concentrate on killing tanks and pillboxes first (if any) with your bombs, and use your offensive machine guns to kill soft targets like armoured cars, artillery, howitzers and AA. In this mode, you won't need your air brakes since you can't break your wings and it's easy to pull up from a fast dive attack, and it's recommended that you keep as much of your speed up from the dives so you are harder to intercept by enemy aircraft.

In Realistic Battles, you should keep your altitude, and look for tank columns to attack. Once you've chosen which tank column you wish to attack(I recommend some ground targets as far from the battlefield or enemy airfield as possible, so you are less likely to be intercepted). Once you are right over your intended target, set your throttle to 0% and point your nose at the at the tank you want to destroy (since you have no bombsight, there will not be a bomb-drop indicator like in Arcade, and you will have to guess where the bombs will drop) once you are nearing your target, you will have to deploy your air-brakes or you won't be able to pull up at high speeds. (you can tell when you are reaching a high speed with the sounds that the air and wings make) Once you drop your bomb(s) point your nose up to pull up. At this point you may or may not have killed your intended target, but it is OK if you didn't you will get better at it with more practice, but you still have your offensive armament to kill soft targets like AA or you can engage enemy fighters that are nearby (which is very likely).

Dog fighting the RB with Ju 87 is a very difficult task if the enemy knows your advantages and disadvantages and uses them to his advantage. I recommend that you avoid doing head-on attacks a much as possible, for you don't have the armament to risk it. I also recommend that you stay low and slow in a combat situation with enemy aircraft(because bad control ability at high speeds ) and try to get the enemy to engage in a turn fight. If he falls for your turn fight, you should end up on his 6 o'clock in 3-5 turns on most enemies, it really depends on if its a British, American or Russian plane, British being generally the better turn fighter. If he doesn't fall for your turn fight, you are most likely going to go down...this plane is not a fighter plane.

Returning to base. when returning to base landing and takeoff is simple, and use of the air brakes will help if you came in to fast to land. But you may be coming back on a dead or damaged engine (The Ju 87's engine is prone to damage and overheat) and it would help a lot if you find the nearest friendly airfield and get there as soon as possible.

It is recommended to research the radiator first, for it gives slight performance improvement and helps with engine overheating, then after radiator research the offensive weapon 7.92 mm belts, after that, you can unlock tier 2 modifications. Performance upgrades will also help greatly in the Ju 87 line.

During the Battle of Britain, the Ju87 was shown to be outclassed and outdated by modern allied aircraft, but with no replacement in sight, a new modification of Ju 87 was developed. The new Ju 87 designated D1 was fitted with a more powerful Jumo 211 engine and a more aerodynamic air-frame. In addition, more armour was added for protection and a better defensive armament of dual 7.92 mm machine guns. The payload was almost 4 times as much as the Ju 87 R2 with 1800 Kg max bomb load. The fuel capacity was increased as well and had the ability to carry drop tanks, too. The D3 version had improved armour from the D1 for ground attack.

The Ju 87 D was used extensively in the eastern front and in North Africa. The Ju 87 was very effective at destroying Soviet counterattacks disrupting supply-lines and in one case on July 5, when StG 77 knocked out 15 trains and 500 vehicles. But everything has to come to an end, the Ju 87 had enjoyed superiority in the early war, but as the war progressed and the Soviet air force grew more effective and obtained better aircraft, the Ju 87 was made obsolete.

The Ju 87 D-3, a ground attack variant that still retained dive brakes, had improved armor. The pilot received some armor in the canopy, 8 mm armored sheets were placed on the fuselage, and some examples even had armored sliding panels in the canopy. Additional armor was also installed around the rear gunner’s position. The new GSL-K 81Z turret had improved coverage. However, most aircrews thought that the gunner seat was less successful than that of the 'Bertha', the Ju 87 B.

The D variant also received a 5 mm armor plating under the oil radiator and additional armor around the fuselage fuel tanks. For a ground attack aircraft, the Ju 87 D’s armament was rather weak, the D-3 variant having nothing but twin 7.92 mm MG 17s in the wings, and the D-5 upgraded to twin 20 mm MG 151/20 cannon. Acting in a ground attack role, the Stuka most often used special containers containing 92 fragmentation SC 2 bombs, which were ineffective against armored targets. In addition, much larger bombs were also used, weighing 250 or 500 kg.