Difference between revisions of "Ju 288 C" 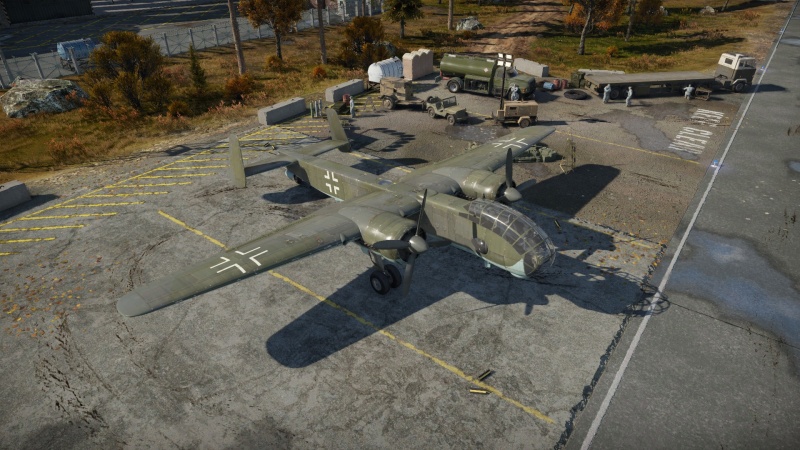 As a bomber, you spawn at a higher altitude, where you can use this advantage to dive to the base you want to destroy. However, do not exceed 690 km/h (430 mph), or the wings will break. A great indication of this is when your wings start to shake uncontrollably - by then, it would be apparent that you need to slow down. A good idea for more savvy pilots would be to use the Manual Engine Control to turn off automatic radiators and fully open them, allowing you near unlimited WEP without overheating and letting you keep as much altitude as possible for a possible emergency dive away from enemy fighters.

In Air RB, there are two predominant types of maps - standard-HP maps and double-HP maps. Standard HP maps typically have three bases, with some exceptions such as the "Air Battle" maps, which have four bases. These bases take a single SC 1800 each, meaning that you can bomb two bases in a single run, yielding just over 1000 points. Note that the airfield is a bombing target once all bases are destroyed. However, about half of the maps you see in-game are "Operation" maps, with four bases and no airfield. These bases take both SC 1800 bombs to destroy, and often feature four AAA emplacements on the edges of the base. When attacking these bases, a great strategy is to drop the bombs at the edges of the base, instead of at the centre. Because of the massive blast radius of the SC 1800, this enables you to kill several AAA emplacements along with the base bombing, which yields additional Silver Lions and RP.

Typically, the best strategy for the Ju 288 when bombing is to utilize the Schnellbomber qualities of the aircraft, and put the aircraft into a 10-degree dive towards the base. For most "Operation" maps, this means that you can bomb the base well before enemy fighters can even see you appear on their screen. After you have dropped your bombs, return to base and reload bombs; the advance airfield (smaller airfield closer to battlefield) works better as long as there are no enemies close by, as you will get airspawn for many of those bases. Fly back, bomb, return to base, repeat. This strategy is simple, effective, and extremely profitable in terms of SL and RP.

The Ju 288 C is a juicy target and will often be targeted by allied fighter pilots. As a result, defensive flying is a must. If you see a fighter coming in for an attack run, the best strategy to use is to dive away - this works significantly better if the Ju 288 C has an energy advantage, as it can outrun most planes at its BR in a dive. However, if they are faster than you (i.e. the F2G Super Corsair), level out and fire on them using your defensive guns. The Ju 288 C is surprisingly well-armed in terms of defensive armament, featuring six 13 mm machine guns and a tail-mounted 20 mm cannon. Try to keep enemy fighters on your tail, as the 20 mm cannon can load Minengeschoß (mine-shell) ammunition that is incredibly damaging against air targets. Finally, avoid all head-on engagements - though the Ju 288 has two pilots, it is not too durable, and a frontal burst from an enemy fighter can easily knock out both pilots.