Difference between revisions of "Jaguar A" 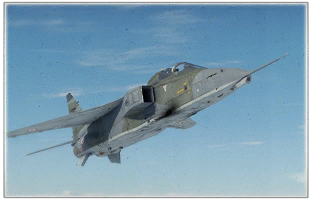 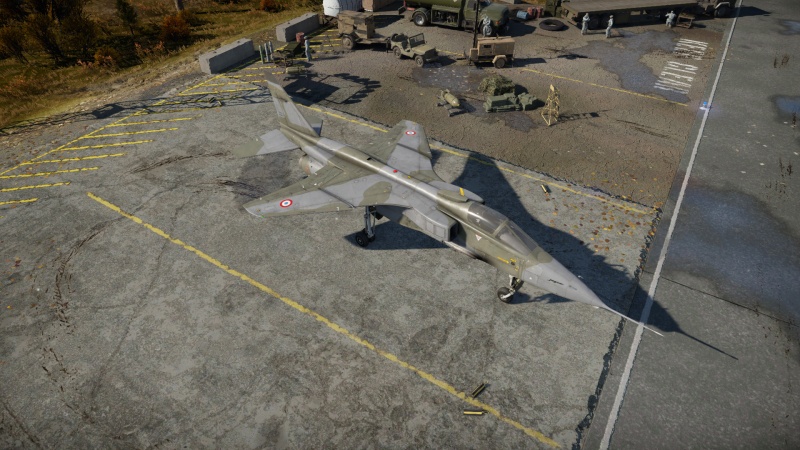 The Jaguar A is a rank VI French strike aircraft with a battle rating of 9.7 (AB/SB) and 10.0 (RB). It was introduced in Update "Raining Fire". It is a twin-engine ground assault aircraft, designed with the transport and operation of heavy ordnance in mind. It also comes equipped with air-to-air missiles, in the form of the dreaded Matra R550 Magic 1. Overall a bomb truck, it is very unwieldy while fully loaded, but is exceptionally nimble once its bomb/rocket load is expended.

The Jaguar A can be outfitted with the following ordnance:

The most exotic loadout proposed by the Jaguar A is the TBA Multi-Dart 100 AB rocket. This rocket is a hypersonic, sub-munition-carrying vessel, with each rocket carrying six darts, and reaching 1400 m/s, or Mach 4.2. Each dart is in fact a small kinetic penetrator, each being able to penetrate 80 mm of flat armour, and relying only on fragmentation of armour as post-penetration damage. While these darts cannot pierce the front (or even side) hull of a modern MBT, it will pierce its roof without problems, and the rocket speed and number of darts gives the possibility of top attacks from a safe distance, with extreme precision.

The Jaguar A is a catastrophic aircraft to grind, because its only air-to-air missiles are locked as a rank 4 modification. The entirety of its opposition will be carrying both IR and semi-active radar missiles. Once these missiles are researched, the Jaguar becomes a force to be reckoned with, and it can be expected that a few kills can be made on unsuspecting enemies. The bomb/rocket load of the Jaguar A is decent, and bombing bases and key targets is definitely a good way to acquire experience. Carrying a hybrid air-to-air and air-to-ground load is a good compromise, retaining adequate ground pounding capabilities while acquiring self-defence capabilities.

It is a good tactic to let pure fighters go in front, and remain at low altitude. That way the Jaguar will not be in the front lines, and will be able to expend its bomb load and attempt to help fighters with its missiles. The Jaguar cannot face aircraft such as a MiG-21, or a Mirage IIIC, or even a Phantom II and be expected to win. The aircraft fares better as a support aircraft.

The Jaguar A was the French variant of the SEPECAT Jaguar developed jointly by France and the United Kingdom. The first prototype flew in late 1968, fitted with the Adour engine. The aircraft later flew at the Paris Air Show in 1969, and the further developed Jaguar A prototype, improved and designed for French service, flew in March of that year. After the commencement of production, the French Air Service accepted the first Jaguar A in December of 1973, one of an eventual 160 Jaguar A aircraft that would serve with the Air Service. As well, the Air Ministry procured 40 additional Jaguar E trainers, to help train pilots for the Jaguar A. A Jaguar being serviced on the ground during the Persian Gulf War.

The aircraft was able to carry an AN-52 nuclear bomb; however, the aircraft never served with the French strategic nuclear force as the role had been taken by the Mirage IV. The aircraft was immediately pressed into service defending national interests in Africa, a mission sometimes referred to as "Jaguar Diplomacy". Thus, Jaguars had their combat debut fighting rebels in Mauritania. The aircraft also flew in the Chad-Libya conflict and in the Central African Republic. During its time in African-theatre service, the Jaguar gained a reputation for being a highly effective ground attacker; Libyan forces frequently tried to sabotage the Jaguars stationed in Chad due to their effectiveness against ground targets.

In the early 1960's, both Great Britain and France were looking into procuring a new jet trainer for their respective air forces. Despite differences in specifications and requirements, the two nations were united in their pursuit for such a new aircraft, thus leading to an agreement being signed in 1965 which would kick off development of what would eventually become the Jaguar.

The first of eight prototypes of the Jaguar successfully conducted its maiden flight in September of 1968. Following the conclusion of further testing, the Jaguar went into production in two major variants - the Jaguar A being the modification used by the French Air Force and the Jaguar S (Jaguar GR.1) being the variant employed by the RAF. Both variants of the machine entered production in the early 1970's, with the first production models being delivered in 1973/'74.

The Jaguar primarily served with France and Great Britain, most notably distinguishing itself in action during the Gulf War of the 1990's. However, Ecuador, Nigeria and Oman also operated modifications of the Jaguar, while India still operates the Jaguar to this day. In total over 540 SEPECAT Jaguars were built.